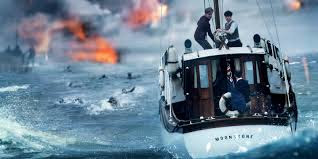 Review © by Jane Freebury
With films about perception, memory, and fluctuating identity, Christopher Nolan has carved out a very particular space for himself on the big screen. His interests could so easily have confined him to the indie sector, but he has had the confidence and the narrative and stylistic brio to crash through, taking narrative jigsaw puzzles like Inception and Memento straight to the mainstream.

A war film determined by the facts of the famous evacuation from France early in World War II might seem like a bit of a straitjacket. Not that Nolan doesn’t have plenty of cred as an action director—his Batman trilogy was outstanding—it’s just that he’s at least as interested in the tricks the mind can play as in representing the action up on screen.

As it turns out, his approach, another occasion on which his direction is based on his own screenplay, has resulted in a really distinctive war film. And a very good one. The evacuation from Dunkirk is brought to life with little of the usual battle mayhem, but with a lot of stillness, silence and participant point-of-view that encourages us to reflect on what was going on within the men who waited, hoped for and despaired of deliverance.

Sheer luck propels us to the beachhead in the first scenes, on the back of the only soldier to survive an ambush in the streets of Dunkirk town. There were six of them, scrounging for cigarettes, drinking from a garden hose, needing to relieve themselves, when enemy snipers opened up and took them all down, bar one (Fionn Whitehead). He is known as Tommy, a sufficiently generic name, once slang for an ordinary soldier, that resists marking him out as an individual either.

At the beach there is line upon line of men waiting to be rescued. Around 400,000 of the remaining (mostly) British Expeditionary Forces in retreat, queueing on the sand and along the breakwater. So British to queue.

The surrender of France is only days away. Trapped by German tanks, strafed by the Luftwaffe, the forces had but a thin khaki line of French soldiers between them and the enemy.

Neither the German ground troops nor pilots are given any identity either. They are unnamed, and virtually unseen. It could almost be a one-sided war, without the binaries, were it not for the relentlessly accurate assault largely from offscreen.

So much else has been elided. There is hardly any blood or viscera. There is no perspectival privilege, so the audience has no more knowledge of what's going on than the participants on screen. None of the characters has a backstory and there is no light-hearted banter, to lower the tension. There are no scenes of Churchill, only a couple of weeks into his role as Prime Minister, in the war room.

In keeping with this approach, the evacuation strategy is only overheard by two soldiers hidden under the breakwater. They have positioned themselves there so they can climb onto a rescue boat, rather than wait their turn.

Against the implacable beauty of a seaside landscape, thousands of soldiers await rescue like skittles in a bowling alley, lined up to be mown down. Somebody says it feels like being a fish in a barrel, somebody else wonders where the RAF has got to.

It's chaos within the awful stillness of a vacuum. Assisted by Hans Zimmer's powerful and insistent score, film ensures that we experience the full catastrophe, from the unendurable wait to the confusion, desperation and terror that the soldiers felt. It leaves an indelible impression.