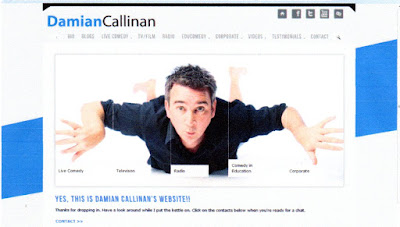 Town Folk is a touring show, taking in local communities around Australia.  There is, and can only be, one performance in each town.  Callinan and his surprisingly small team research and make contact with a wide range of people in the chosen community, arriving some 3-5 days ahead of the show.

There is no script.  The show is put together on the run as they film features which particularly distinguish the town in question, all done with a rumbustious humorous approach, even on matters of serious local controversy.  In the case of Queanbeyan, much of the film shown last night became a points-scoring competition between Queanbeyan Shire and Palerang Shire, recently merged by the New South Wales State Government against the wishes of many in both shires.

While Queanbeyan, for example, has a properly set-up sportsground with a large and even impressive seating facility – indeed, almost a stadium – the Palerang town of Bungendore has nothing but an open playing field with one tiny completely unimpressive exposed to the weather 3-tier seat for, maybe, 20 barrackers at best.  Queanbeyan 1, Palerang 0.

Over a good two hours, with interval for drinks, Damian Callinan shows his skills as an expert one-time drama teacher, improvising like mad and making it all work, with the participating audience in fits of laughter at every twist and turn in this outsider’s interpretation of their town.  There was not a dry eye in the house.

With too much to even begin to describe, I’ll limit myself to what I thought was a neat slogan for Queanbeyan, invented by an audience member doing homework in the interval.  Apart from the obvious two sided sign at the border with the Australian Capital Territory which, on one side says “Queanbeyan – Gateway to Canberra”, and on the other says “Canberra – Gateway to Queanbeyan”, I liked the more subtle “Queanbeyan – Best For Good Burgers” which could also read “Queanbeyan – Best for Good Burghers”.  This would need a Rodin statue, of course.

Damien Callinan, as I see him, is following in a comic tradition of his home town, Melbourne, which began in the 1970s with Rod Quantock’s stage shows at venues like The Last Laugh, his 1980s television show Australia – You’re Standing In It and his follow-up events variously known as Bus, Son of Tram or just Bus, where he took his audience literally on a bus and visited all sorts of public and private places unannounced, introducing “unsuspecting people to this idea that the world’s not such a frightening place and you can have fun with strangers”  [ https://en.wikipedia.org/wiki/Rod_Quantock ].

The best way to understand Callinan’s modus operandi is to go to his web page:

Posted by Canberra Critics Circle at 10:27 AM