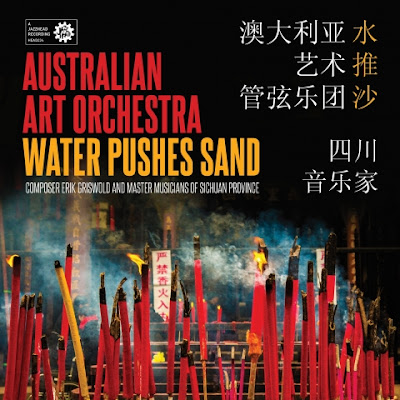 According to the program notes, ‘Water Pushes Sand’ features China’s Sichuan music combining rustic country folk music, street songs and ear-splitting cacophonies of gongs and cymbals.  A collaboration between composer Erik Griswold and musicians and performers from Sichuan and the Australian Arts Orchestra, with an emphasis on improvisation, it is certainly different, at times exciting and entertaining but often puzzling as well.

A well-produced show with good lighting choices, fine video accompaniment and fascinating singing and dancing by Sheng Li Zheng, there was much here to enjoy.  Of course, it’s easier for us to relate to the western-style music woven around the more challenging Sichuan elements but it all comes together in a generally satisfying and enjoyable way.

I would have enjoyed it even more if the individual musical items were explained either by the composer, who occasionally commented during the performance, or in the program.  Being told by the composer, ‘that’s a song about tofu’ didn’t really enlighten me much.  I enjoyed the fine singing of Sheng Li Zheng but I had no sense of what he was singing about and I wanted to know more about the background to his spectacular changing faces dance.

The music was mostly very loud and the amplification of the music in this reasonably small venue was often at an uncomfortable level.  I saw some audience members around me with hands over their ears.  Ninety minutes of sound at this level was a bit wearing.  Maybe an interval would have helped a bit.

The piano playing by composer, Erik Griswold, was a highlight of the performance.  There was also fine playing in featured passages by Peter Knight on trumpet, Scott McConnachie and Tim O’Dwyer on the saxophones, Min Dong, the bamboo flute player, Mindy Meng Wang on the Guzheng, Sam Pankhurst on Contra Bass and Kai Zhi Zhong and Vanessa Tomlinson on percussion.