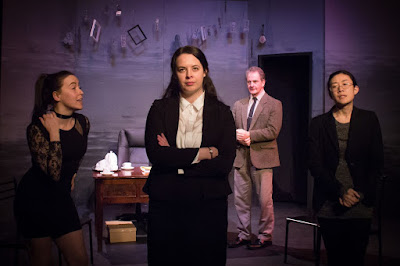 If only King Lear had been a little nicer to his children.  Greg Gould's new play The Inheritance has a dead patriarch splitting his empire between three daughters - one unquestionably noble, the other two substantially more dodgy.

The King here is property mogul Lesley Archibald Essington (John Kelly), and the daughters are a motley crew.  Eldest Amanda (Alexandra Howard) is determined to follow in daddy's footsteps and run his company - despite a catastrophic track record in business.  Middle daughter Emily (Jess Waterhouse) has adopted the Paris Hilton model and translated her family's notoriety into a lucrative career as a tabloid sensation.

The youngest daughter is of course the good one: noble Gina (Linda Chen), a self-made doctor who waited tables at uni so she could pay her own way to a career helping the needy.

Amanda of course wants to buy something she thinks she can flip for a quick profit.  Emily meanwhile uses her charm to twist a ludicrously expensive mirror out of dad.  Only Gina goes home with nothing, with her father rejecting the doll she wants as too old and ragged.  And just to ensure there is no doubt of Gina's overwhelming moral superiority, we even get to see her conquer the temptation to filch some cash from dad's wallet.

This is the set-up for a comedy where the craven heirs grovel and debase themselves for a slice of the fortune.  But the stakes are oddly low for the characters, with the will reading treated as a tedious formality.  Amanda already has her career, Emily is self-financing, and Gina is completely indifferent to it all.  Sure, $500 mil would be nice, but nobody faces poverty or imprisonment without a quick cash infusion.

Instead the bulk of the conflict in the play concerns Lesley's histrionic widow Dianna (Victoria Hopkins), who holds up the will reading by locking herself in the bathroom and refusing to come out.  The daughters then each take their turn using a different strategy to coax her out - a monumental event waiting patiently on a petty problem.

While the family do snipe, for a family that should be squabbling over an inheritance they are unusually loving.  In particular their affection is notably physical with frequent hugs and embracing, particularly from party girl Emily, who also has a good line in mothering.    The elder sisters do seem a bit blasé about their father's recent demise, but Gould is not about to let a few moral foibles disqualify any of his characters from getting a happy ending - he loves them too much.

The play is exceptionally well cast, with actors playing to their strengths in the different parts.  The main discord is in the clash of acting styles in the legal team, with lawyer John Layder (Rob DeFries) and his flunky Paul (Vivek Sharma) seemingly performing in different plays.  At points, the play does struggle to find just the right tone: a monologue by Victoria Hopkins tries to shock the audience with raw intensity, and when she does so she loses the comedy that comes from delivering this speech while perched on a toilet.

At times, the play tilts towards farce, but always stops short of complete madness in favour of character comedy.  In a farce, a secret would normally lead to a series of increasingly complex lies, but in this play secrets exist only to be revealed: party poppers that burst with cheer rather than deadly landmines the characters have to tiptoe around.  The plotting can also meander, especially in the opening scenes, but Gould's excellent dialogue and clever jokes get us through the lean sequences.

Direction by Cate Clelland brings out the characters, but the blocking felt stale: in comedy so driven by relationships, it was distracting to see actors so frequently turn away from their conversations in favour of direct address to the audience.  The set design also jarred with the content of the play, with the broken picture frames and dour colours not reflecting the robust shamelessness of the family.

The big reveal of the play is so obvious that it will surprise no-one, but Gould's love for his characters won the day, with the result that a night of vibrant comedy was capped by a tender and moving finale.  Vanity, lust, greed - to Gould these are mere peccadillos, and completely forgivable when the company has been this entertaining.

In this play Gould stretches his wings and shifts from the short form to the family saga, and while sparkling dialogue does paper over some soggy plotting, perfectly cast actors and excellent jokes provide a truly delightful night of entertainment.
Posted by Canberra Critics Circle at 8:17 PM