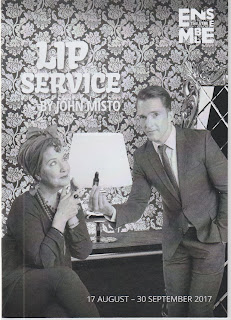 A huge amount has been written about Helena Rubinstein’s world-wide make-up empire, starting in Melbourne, Australia, in 1902; her life-long competition with Florence Nightingale Graham aka Elizabeth Arden; and with Charles Revson of Revlon fame.  An excellent place to grasp the impact of Rubinstein is to go to

Misto makes Madame his central character, so well drawn by this performer that I entirely forgot she was the Amanda Muggleton I remember from Steaming, and her recent solo show, The Book Club.  Make-up, costume and her exquisite Polish-Jewish-New York accent and language mannerisms certainly created the picture of the eccentric Rubinstein, but it was the truth in Muggleton’s acting – in a large number of short cameo scenes – which captured my imagination.

The play has been written from the point of view of Patrick O’Higgins, usually described as her gay secretary-factotum, who in real life was a journalist on Flair magazine in New York when he met Helena Rubinstein by chance in 1955 and was employed by her for the final ten years of her life. I haven’t read his biography of his boss, but I imagine that some of Misto’s story comes from that work, and from O’Higgins’ niece, Marianne Hinton who “generously shared her memories and photographs of her uncle Patrick and was delighted with the play.

Tim Draxl’s characterisation task as an actor was made a little easier than the demands made on Muggleton, but their playing together was technically brilliant.  There was so much fun in the farcical side of Rubinstein’s treatment of O’Higgins that every scene extracted laughs all round the Ensemble’s intimate in-the-round theatre, that we were ready to accept the contrasting feelings of concern for Helena at the intimation of an attack at the end of Act 1; of understanding as ‘Irish’ (as she called Patrick) at last found a way to allow Helena to cry for the death of her son, Horace; and even of his sense of love for her, and loss, when she died – in 1965 in real life.

Draxl’s final line, yelling at the illusion of Charles Revson, taking Helena’s part, got just the right level of laugh to relieve what might have been an overly sentimental death scene.  Good writing with precise acting brought us back from the edge.

Elizabeth Arden’s role dramatically is written as the constant foil, because, as she probably was in real life, she may not have had the glorious self-centredness of Helen Rubinstein, but she was the more consistently successful businesswoman.  The ‘straight’ character might not have been as complicated to perform, but Linden Wilkinson provided the exact quantity and quality of contrast needed to make sure the dramatic tension – the source of our laughter – never fell away.

So why would an Australian write this sort-of comedy about these women?  Certainly to make the point about women living from the late 19th Century to the mid 1960s who made their way with great financial success in the men’s world of business.  Perhaps it was to show (though not directly said) that it was in Australia in the early 1900s that a woman had the sense of individual freedom and power to make the start that Helena did in Melbourne (in real life some sources say she made £12,000 in two years), while I wonder if the same might have been true for Florence Nightingale Graham in Canada.

If it was true that young women at the university in California where Rubinstein spoke when receiving an honorary degree objected to her success in making women want to wear make-up (and I have seen that change in attitude take place in my own daughters), then the play about the make-up business still has resonance.  This thematic issue was certainly played up in this production by showing the actual television adverts of the 1950s which began to rile women in the 1960s.

So the fun of this play which could feel a bit superficial, especially in the first half, is perhaps a mask for more significant thinking.

And there was one issue which is raised early in brief, and then again more bluntly later, but without going into any depth.  This was about what happened to Helena when she stayed with her two uncles in a country town in Victoria for the year or so before she shifted to Melbourne.  She was around 20 at the time.  Wikipedia says she had a ‘falling out with her uncle’.  Her words in this play imply – that is, much more than suggest – that she was abused by at least one of these men.  Her relations with her husbands, her sons (especially with Horace, named after her own father), and with the gay Patrick, as we see them in the play, show a dark side to the strength of her independence as a woman.

Though it seems that the real Patrick O’Higgins wrote a humorous biography (having known her only in her later life) and John Misto seems to have picked up on that, perhaps there is a place for a play on the other side of the knife-edge, taking up what happened in Coleraine, Victoria, Australia.

Lip Service, then, is an interesting play, with a great production, in other words.