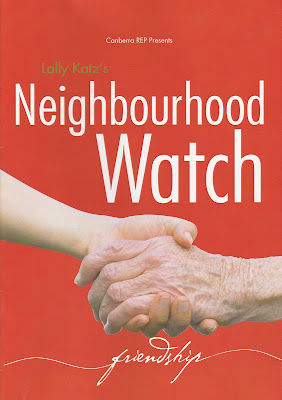 Lally Katz’ play, ‘Neighbourhood Watch’, premiered in Melbourne in 2011 and has been quite a success in various productions around the country.  There’s talk of a future film version, too.

The play focusses on the interaction between several inhabitants of a typical suburban Canberra street between 2007 and 2008.  An elderly Hungarian woman, Ana, develops a friendship with a troubled younger woman, Catherine.  Ana’s forceful personality and stories from her past life create a reality check for Catherine that she desperately needs.

With 29 scenes and a multitude of locations, the play is a challenge to stage.  Kate Blackhurst’s production doesn’t solve the problem with many of the scenes being played in small areas on either of the stage, leaving the centre stage under-utilized.  There are difficulties hearing the actors from these areas, too, especially as some of them play with a strong Hungarian accent.

Nevertheless, there are fine performances from the cast.  Liz de Totth is well-cast as the elderly Ana and is quite believable as this dominant personality who is just as needy as everyone else.  Her interruptions at the Neighbourhood Watch meeting were nicely played and very funny.

Alex McPherson gives arguably her best performance ever as the troubled Catherine.  The actress displays a strong depth in her playing of this complex role.  Craig Battams as Ken, Catherine’s housemate, brings a nice realism to his role and there are good performances in multiple roles by a strong ensemble cast.

Lally Katz’ play rambles a bit and some of the flashbacks seem superfluous.  The pace of this production felt a bit slow especially in the second half and scene changes need to be tightened up.  In a couple of instances, music playing while the actors were speaking was a distraction.

Overall, it’s a play that tells an entertaining story with interesting characters, a few surprises and a satisfying resolution at the end.

Len Power’s reviews are also broadcast on Artsound FM 92.7’s ‘Artcetera’ program (9.00am Saturdays) and on other selected Artsound programs.
Posted by Canberra Critics Circle at 11:48 AM