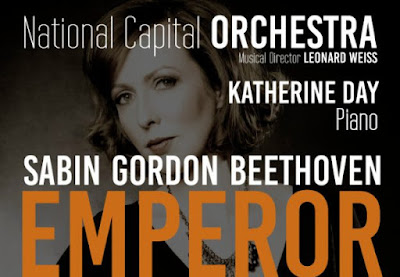 
The National Capital Orchestra under the baton of Leonard Weiss presented an epic concert with two works by Australian composers, Nigel Sabin and Christopher Gordon, both of whom were in the audience at the Q Theatre, and Beethoven’s magnificent Emperor piano concerto Number 5 with soloist Katherine Day.


Leonard Weiss stated at the start of the concert that the orchestra was very keen to play Australian music that, while it was able to be heard on the radio and on recordings, was not often performed in concert.  The two works presented in the first half of this concert were good examples.  They were thrilling to hear performed live.

Nigel Sabin’s ‘Symphony’ was first performed in 1996.  Described as a whimsical and humorous depiction of contemporary Australian life, it has grandeur and drama as well as lightness and irreverence.  It leads to a busy and exciting finale.  The orchestra played it very well.

The music for Christopher Gordon’s ‘Suite From Moby Dick’ started life in 1997 as part of a film score for a mini-series based on Herman Melville’s classic novel of the sea, ‘Moby Dick’.  This is very visual music, evoking images of the sea, the drama of whaling ships chasing whales and leading to a tragedy for a ship’s crew.  The orchestra brought out all the atmosphere and colour of this exciting work.  There was particularly fine playing by the percussion section in the final movement.

Beethoven’s Piano Concerto Number 5, ‘Emperor’, was first performed in 1811 and has retained its popularity in the concert hall ever since.  A beautiful work that flows from one marvellous melody to another interspersed with exciting dramatic passages, it makes major demands on the abilities of players and soloists to get it right.  Katherine Day gave an excellent, very sensitive performance of the work and the orchestra gave her very strong support throughout.

This review was first published in the Canberra City News digital edition on Monday 7th of August.

Len Power’s reviews can also be heard on Artsound FM 92.7 ‘Artcetera’ program from 9am on Saturdays and on other selected Artsound programs.
Posted by Canberra Critics Circle at 11:15 AM