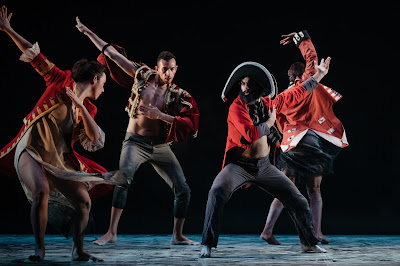 Bangarra's new dance Bennelong opens with a circle suspended in the air - a symbol of timelessness, but also a portal that the dancers will leap through to create the symbolic Birth of Bennelong.

Later in the dance a doorway will occupy the same place on the stage.  Rather than leaping through it in joy, the clan will stumble through, strangled by ill-fitting Western clothes.  With Western symbolism also comes Western smallpox, and when the clothes stripped from the dead are bunched together their colours reveal the Union Jack.

Bennelong is the story of an Eora man who became a bridge between two worlds but also found himself trapped between them, belonging fully to neither.  The historical Bennelong was a kidnap victim, abducted to forcibly learn British language and culture, but after his escape voluntarily acted as a bridge between his people and the British settlers, eventually even travelling to London.

Clothes are not just used to represent strangulation by smallpox, but the pain of assimilation. The Eora Nation are costumed to represent their traditional attire, but when the fleet arrives the early settlers are shockingly modern in dress.  The unexpectedness of this moment perfectly captures the dislocation caused by the arrival of a new, aggressive community.  When the Eora are forced to assimilate, they slip on not colonial fashions, but trendy blue jeans: not only have they lost their land, but they are now prisoners of a new standard of beauty and fashion.

Beau Dean Riley Smith's Bennelong has the mark of the outsider, even in the early Eora Nation scenes a misfit in appearance and movement.  This early dance begins with the male and female performers separated to represent men's business and women's business, but Bennelong seems to move easily between the groups, prefiguring his later ability to slip between cultures.  Bennelong is played with a lot of grace, a hungry learner who can slip on clothes not his own, and with a sacred ability to dance another people's dance.

But he is also a leader, a dancing master able to lead people in new footwork.  Bennelong's friendship courtship dance with Phillip is fascinating because it is a dance of equals - leaving aside for the moment the awkward detail that Bennelong was a prisoner. Both have responsibility for others, and watch each other like hawks, aware that the relationship between their two peoples depends on how well they can dance together.

Brilliantly, dance is also depicted as an instrument of imperialism: when the settlers come together in an Irish jig, their unity is genuinely threatening.  It is strange that the corroboree scene is still in the individualist modern tradition, rather than drawing on the powerful sense of community and belonging we find in the social Indigenous dance tradition.

The climax comes in the dance Crown, where Bennelong attends a ball in London.  A neon boomerang is suspended above the dancers - a perfect symbol of cultural appropriation.  The British seem like decadent alien overlords, with even the Mozart strains in the music taking on a sinister tone.  Bennelong can dance the dance - never mind if he is truly accepted or a tolerated curio - but his companion Yemmerawanye is crushed by it, contorting in pain as the dancers crowd on them.  Not everyone can slip between cultures as easily as Bennelong.

That triggers Bennelong's downward spiral.  When he returns to the Eora, we see him trampling on a woman, and one unforgettable image has him tip his captain's hat to drink grog from it - a perfect fusion of the honour and torture of his life.  Finally he is literally boxed up on stage, a great communicator and ambassador left utterly isolated.  There is simply nobody he can talk to.

Bangarra's new show Bennelong gives a fascinating depiction of a character who could be played in many different ways, and shows both the torment of having your world stripped away but finding grace in those who can learn to dance a new dance.

Posted by Canberra Critics Circle at 10:54 AM