AROUND THE WORLD IN 80 DAYS 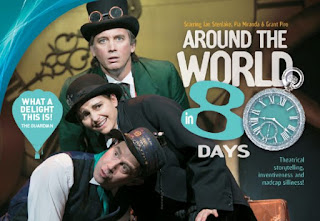 AROUND THE WORLD IN 80 DAYS.by Jules Verne.

While watching Ellis Productions and Aleksander Vass’s production of Jules Vernes’ Around the World In 80 Days at Queanbeyan’s Q Theatre I am reminded of the Chorus’s Prologue in Shakespeare’s Henry V : “Can this cock pit hold the vasty fields of France.”
Jules Vernes’ nineteenth century epic tale of the travails of Phileas Fogg to circumnavigate the world in eighty days to secure a wager with sceptical members of the Reform Club is a prophetic announcement of the remarkable advances in technology and transport that will change the world in the following century. Vernes’ predictions of submarines and man’s landing on the moon have come true, and aircraft can now circumnavigate the world in a matter of hours rather than days.
To bring Fogg’s journey, accompanied by his valet Passepartout and pursued by Detective Fix of Scotland Yard to the stage with only three actors is a gargantuan challenge, and one that is only partially met.  A bet to achieve such a task is not one that I would readily wager. The touring production is impeccably designed, lit and staged. It is professional in its aspect and competent in its performance. Three very good actors play the roles of Fogg (Ian Stenlake), Passepartout (Sharon Millechip) and Fitch (Wayne Scott Kermond ), and keep up a frenetic pace changing characters in the blink of an eye. It is primarily left top the versatile, lively and charismatic Millechip to take on the majority of changes with some support from Kermond as the rescued Indian princess, in particular. Teremce O’Connell is a veteran of the stage and embraces the challenge with imagination, drive and energy, and he keeps the pace rollicking along.
And therein lies a problem. Director O’Connell keeps the performance moving at a crackerjack pace, with deft moments of farce, pantomime and a briskly told narrative to try and keep audiences of all ages from seven up to speed. It is a clever and lively strategy, but Vernes’ panoramic splendour becomes diluted in the telling. For those, unfamiliar with the novel, there may be moments of confusion as the trio sweep along from England to India to Yokohama in japan and the coast of England. There is much to enjoy about this fresh and frolicking version of events, an animated romp, with more show than substance.
Audiences will enjoy this professionally told production. The performances are solid, although Stenlake’s Fogg lacks a certain impetuous resolve and driven determination and Kermond’s Fix seemed at times to lack the projection of confidence. Millerchip offers the effervescence and zestful spirit that fills the stage with fun.
Credit is due to an excellent touring design which recalls the Coles Picture Book drawings of another century. The designer is not credited in the programme I was given, but touches such as the moving hands of the clock and the rising trunk of the elephant bring the adventure to life.
Perhaps this stage adaptation of Around The World In 80 Days works best as a simple and enjoyable introduction to Jules Vernes’ classic tale. However, I would recommend that the real experience would be better gained by reading the book or even hiring the DVD of Mike Todd’s spectacular Cinemascope film with its suprb locations and brilliant performances by David Niven, Cantinflas, Robert Newton and Shirley Maclaine as Princess Aouda. Failing that, Ellis Productions and Aleksander Vass have staged an enjoyable introduction to Jules Vernes’ immortal tale.
Posted by Canberra Critics Circle at 4:17 PM