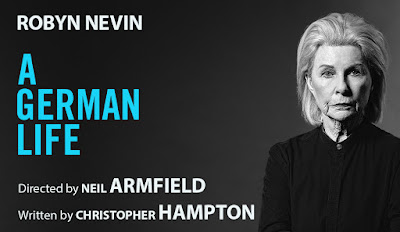 The Playhouse, Canberra Theatre Centre to 16 May

There’s always been a question about how much ordinary German people knew about the atrocities committed in the Second World War by the Nazis towards the Jewish people.  Most maintained that they knew nothing about it and were just as shocked as members of the liberating armies.  The truth will probably never be known.

Christopher Hampton’s play focusses on Brunhilde Pomsel who worked as a secretary to Joseph Goebbels, the Nazi Minister for Propaganda, during the war.  Drawing on transcribed interviews in 2013 with Pomsel when she was 102 years old, Hampton has fashioned a compelling play that gives us an opportunity to examine one German woman’s life before and during the war and, from her actions, assess her credibility.  Did she know or is she lying?

This one character play needs to be performed by an actress with extraordinary range and skill.  Australia’s Robyn Nevin meets the challenge of this marathon role superbly, giving a brilliant study of a fascinating and enigmatic woman.  She plays her without judgement, leaving the audience to look for clues and make up their own minds.

Her German accent is perfect, sounding exactly like a native Berliner.  She becomes this old woman on stage so totally that it is a shock to see her suddenly become the younger, smiling and energetic Robyn Nevin at the curtain call.

Set in what appears to be a nursing facility room, well-designed by Dale Ferguson, there is nothing in the antiseptic surroundings to distract us from this woman’s story.  Director, Neil Armfield, knows he has an actress who can hold our attention throughout and there is minimal movement consistent with a very elderly woman in that situation.

Pomsel’s memories are occasionally augmented with projected film from wartime on the walls of her room.  It’s well-done, giving a dream-like quality to her memories.

Composer, Alan John, has composed background music that adds a quiet, elegiac atmosphere suiting the subject matter very well.  It’s given a fine, unobtrusive performance at the side of the set by Catherine Finnis on cello.

The play runs for nearly 90 minutes without an interval.  It captures your attention so completely that it's over before you expect it to be.

Once in a while in theatre you get a performance you’ll never forget.  Robyn Nevin in ‘A German Life’ is one of those.