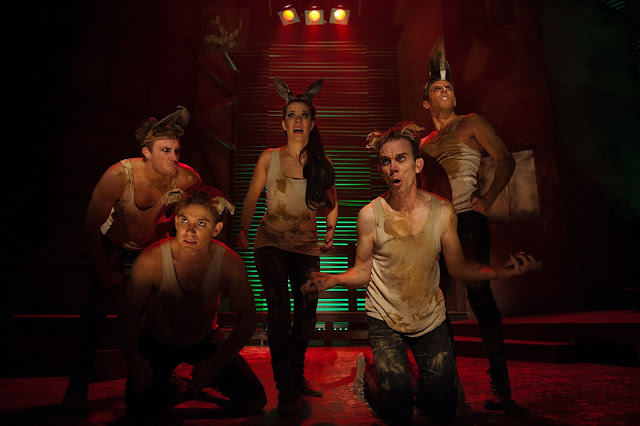 Adapted by Nick Skubij – Directed by Michael Futcher
Designed by Josh McIntosh – Lighting Design by Jason Glenwright
Sound Design by Guy Webster
Canberra Theatre Centre 6th – 8th May.
Reviewed by Bill Stephens.
Shake and Stir has built an enviable reputation for its gritty, provocative productions. Its production of “Animal Farm”, conceived 10 years ago and toured nationally 8 years ago, attracted national attention to the company.
Now revisited and revised and currently enjoying a sold-out season in the Canberra Theatre Centre as part of an ambitious seven-month national tour, it is again directed with endless inventiveness by Michael Futcher.
This time around it boasts a much more imposing setting, and as a result new lighting and sound design, all by the original designers, Josh McIntosh (set), Jason Glenwright (lighting) and Guy Webster (sound). It also retains two of the original cast, Nelle Lee and Tim Dashwood, with Darcy Brown, Gideon Mzembe and Steven Rooke replacing Ross Balbuziente, Bryan Probets and Nick Skubij.
From the opening moments featuring the harrowing slaughter of one of their number, the audience finds itself reluctant witnesses to the daily lives of a group of farm animals, among them, horses, pigs and sheep. The death of the farmer provides the opportunity for the animals to take control of their own lives and set up some guiding rules. One by one these rules are usurped by the pigs, who by subtly changing each rule manage to seize power over the rest.
Relying on physicality rather than props, the muddied actors portray a variety of animal and occasional human characters. They also conjure up the impression of crowds so seamlessly and convincingly, that at the final bows, it comes as a shock to realise that only five actors have been involved.
Each of the actors gives strong, committed performances. Even so it is hard to erase the memory of Gideon Mzembe’s dogged old workhorse, Boxer, whose reward for a lifetime of hard work is the knackery, or Nelle Lee’s flighty pony, Clover, whose initial optimism eventually deteriorates into resigned acceptance, or Darcy Brown’s cruelly opportunistic porcine, Squeaker. All portrayals so vivid that they remain in the memory long after the play has finished. 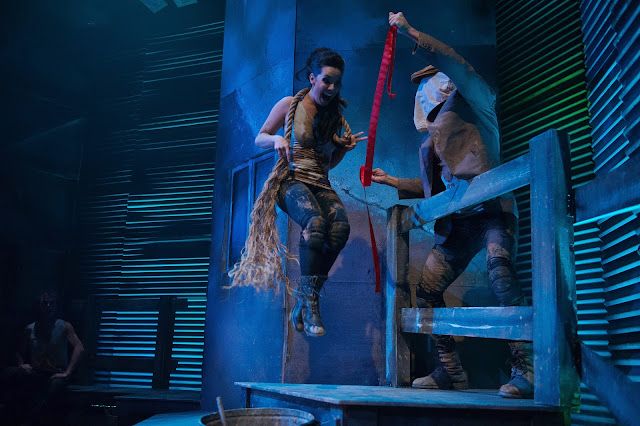 George Orwell’s allegory, originally reflecting the events of the 1917 Russian Revolution, uses animals to represent Russian politicians, voters and workers. However, having lived through the recent Trumpian era, many of its references, especially the manipulation of “alternative facts” and “fake news”, vividly bring to mind recent political events, although perhaps rather less subtly now than when Orwell first penned them.
Orwell’s “Animal Farm” has lost none of its power to disturb. It may be uncomfortable viewing, but this extraordinary production by Shake &Stir is outstanding theatre, providing a provocative and disturbing vision of what could so easily be the future of society. 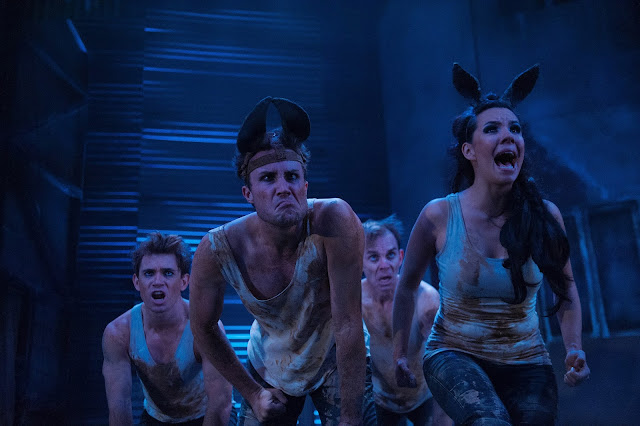