The 7 Stages of Grieving by Wesley Enoch and Deborah Mailman.  Sydney Theatre Company at Wharf 1, May 21 – June 19, and at Canberra Theatre Centre Playhouse, June 23-26.

Reviewed by Frank McKone
May 29

Elaine Crombie’s performance of The Woman in The 7 Stages of Grieving is at once terrifying and glorious.  This is an acting role which does not provide her with the personal distancing an actor can normally use to protect herself emotionally.  She represents her personal reality of survival after 233 years of violent oppression by an inhumane colonial society – our Australia.

“We can’t go back now.  To go back is to deny our humanity.”

She means reconciliation now, no more WRECK ON SILLY NATION, the joke which flashes on the screen behind her.  Should we laugh?  Of course not.  But in her dignity and strength of character and purpose, the humour central to her Indigeneity, she gives us permission to see the joke.  And we laughed, with her.

The Woman is not a character in a play.  She is Elaine Crombie investing in our education, offering us a new understanding.  Asking us now not merely to act in conventional sympathy, but to take practical action politically to achieve proper recognition of the justice of self-determination for First Nations people in Australia, whose continuing culture is now known to be at least some 65,000 years old – twice as old as the broken history of the European invaders in 1788.

The addition this year of 7 Acts of Reconciliation starts with An Act to Lift the Age of Imprisonment so that 10 and 12 year old children, whose families need help and support, will no longer be jailed – as they are now, for example in one of her stories, for swearing at police who are applying racial profiling and violently arresting them for minor offences as if they are adult criminals.

Then there is her own story of accidentally locking her keys in her car.  Police will not believe it is her car, as she tries the door.  This is no joke.  No-one laughed.

She names a clutch of offending politicians, from Peter Dutton to Pauline Hanson.  For me, the most upsetting is Malcolm Turnbull – the apparently moderate – who instantly dismissed the Uluru Statement from the Heart.  What an absolute insult!

I can only conclude as director Shari Sebbens ends her program note for this, the fourth production by the Sydney Theatre Company since 1995:

“To me this play feels eternal,
which makes me so happy.

But also, this play feels eternal
And that makes me furious.”

Don’t miss Elaine Crombie in The 7 Stages of Grieving, in Sydney and soon in Canberra.  Don’t lose your fury, but please, to keep your balance, also enjoy this picture of the happy team working on the production:

And consider the story of the play in the Writers’ Note:  “In many ways it is not a play that is to be slavishly reproduced but is an invitation to be remade with every passing year.  We once entered 7 Stages into a playwriting award and were rejected as they said it was not a play but more a ‘blueprint for a production’. 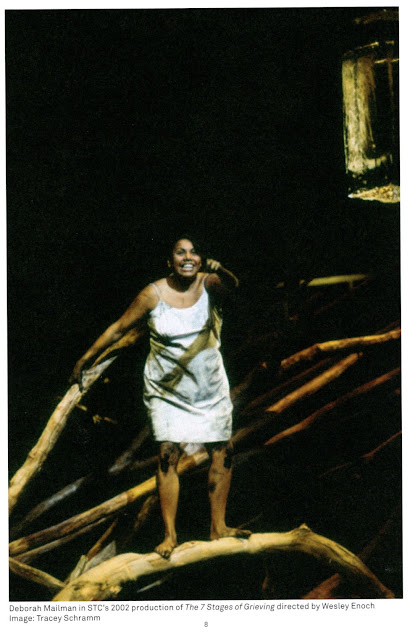 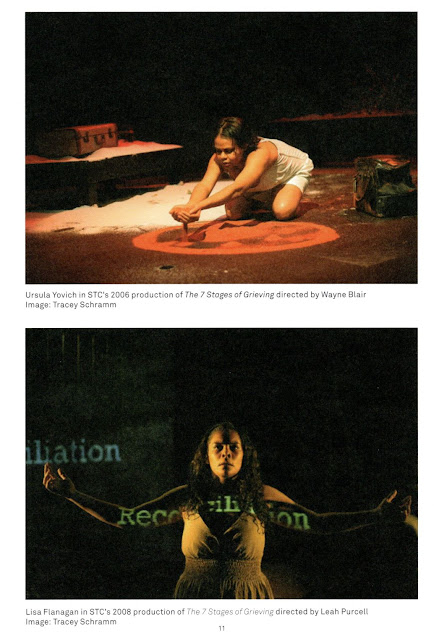