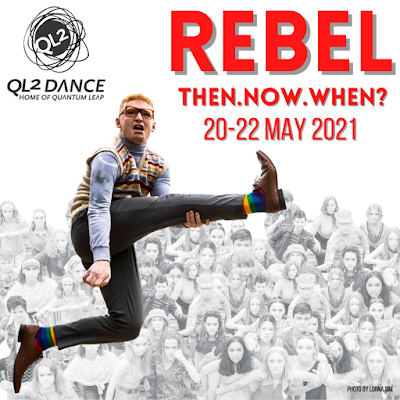 The Playhouse, Canberra Theatre Centre to 22 May

Down through the ages, people have rebelled for change.  In our own times, we’ve witnessed and been involved in some extraordinary calls for positive action.  We feel impatience and even anger at the slow rate of change.  Music has been a major factor over the years in that call and continues to be so.

QL2 Dance’s production, ‘Rebel Then.Now.When?’, focussed on the struggles for change in the past and the present and questioned where and when for the future.

The first section, ‘Then’, choreographed by Ruth Osborne and Steve Gow, reflected on the 60s and 70s Anti-War, Gay and Women’s Liberation and Civil Rights movements.  The dance styles in the piece flowed together like memories, resonating especially with older audience members who were part of it all.  Colourfully costumed by Cate Clelland against a backdrop of strong and stark video images of world events imaginatively produced by Wildbear Digital, it was a clever evocation of a landmark time in the 20th century where rebellion for good is strongly remembered.

The second part, ‘Now’, choreographed by Jack Ziesing, focussed on identified rifts in society and the dangers we currently face as a community in our interactions with each other.  This piece was especially visually arresting with dramatic lines and groupings of the dancers prowling the stage restlessly, underlining the ills in our communications within societies.  There were extraordinary moments of athleticism in the dance and the overall message was very clear and satisfying.

The third part, ‘When?’, choreographed by Jodie Farrugia, was a reflection on recent  identified inequalities in our personal interactions, especially gender inequality and toxic masculinity.  An expression of vulnerability was evident in the early stages and the coming together of community support for individuals and each other was strongly conveyed as the work progressed to a confronting climax of urgent demands for our basic human rights.

The 28 dancers in all three parts gave highly committed, mature performances, showing a deep understanding of the issues they were presenting through dance.  Everyone on that stage displayed strong dance expertise and handled the challenging choreography with dazzling skill.

Mark Dyson’s intricate lighting design included an inspired use of horizontal lighting from the wings as well as an extraordinary hazy cathedral-like effect at one point.  The music by Adam Ventoura ranged cleverly across the different eras, creating an atmosphere that heightened the visual aspects of the show.

Once again, QL2 Dance has produced a show that is exciting, relevant, colourful and memorable.