MUSIC FOR VOICES AND BRASS 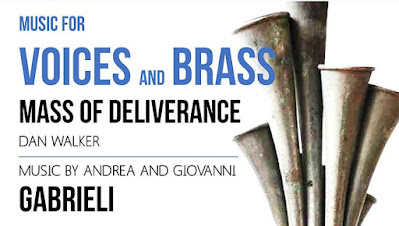 With their first concert for 2021, Canberra Choral Society filled Llewellyn Hall with the sound of voices, trumpets and trombones in a spectacular performance of contrasting works from the 16th and the 21st centuries.

The first half of the program presented works by Giovanni Gabrieli and Andrea Gabrieli.  Both composers spent much of their careers as organist of St Mark’s Basilica in Venice in the 16th Century.  They utilised the unusual layout of the church with its two choir lofts facing each other to create striking spatial effects.

After a confident opening with Giovanni Gabrieli’s “Cantate Domino”, arranged for the choir by Dan Walker, the brass instruments played one work each by both composers from the hall’s balcony.  The sound coming from above and behind the audience was quite electrifying, giving a hint of the type of spatial effects the composers were renowned for in their works in Venice.

Three more Gabrieli choral works followed.  There was powerful, dramatic singing by the choir as well as a fine sensitivity in the quieter passages.  The brass instruments added a robust sound to the singing and gave a pleasing performance of a work for brass only, “Canzon a 5”, by Giovanni Gabrieli.

The Gabrieli works were followed by the Canberra premiere of Dan Walker’s “Mass Of Deliverance”.  Composed in 2014, this setting of the Latin mass text is a nicely contemporary work, accessible, tuneful and quite moving in places.

The “Benedictus” was particularly haunting with the lone trumpet of Brendon Tasker against the voices. Anthony Smith’s melodic piano accompaniment was also notable in various sections of the work.  The choir sang the work with obvious enjoyment and the balance of sound between the choir and the instruments was just right.

Music director, Dan Walker, gave the audience a brief introduction to the concert that was enlightening and entertaining.

The uplifting sound of voices and brass in this concert felt like a hopeful signal to the end of the period of darkness we have all experienced.  It was an excellent choice of program and superbly performed as well.

This review was first published in the Canberra City News digital edition of  the 3rd of May 2021.