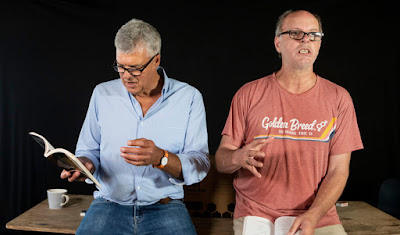 WE’RE hardly post-COVID, but theatres are busy here one more. It’s a relief.

In recent weeks I’ve been intrigued by the real life premise of “The Twins,” impressed by the honesty of “Little Girls Lost in the Woods,” happily amused by the zany adaptation of “Jekyll and Hyde,”  watched John Bell ruminate quietly on the value of Shakespeare and been devastated by Robyn Nevin in “A German Life.”

“The Twins” was a bit of a strange one. Two actors, Greg Fleet and Ian Darling appear as themselves. and ruminate on where life has taken them since they last acted together. One has gone into other fields, one has stayed an actor. The line between yarning and theatre was a thin and occasionally awkward one but there was a nice tension between the past and the present, ambitions realised and those not. 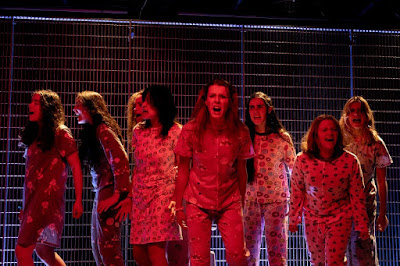 “Little Girls Alone in the Woods”

“Little Girls Alone in the Woods” by Morgan Rose is inventively based on “The Bacchae.”  It was given an imaginative production by a large and well-focussed Canberra Youth Theatre cast of varying ages, two younger ones proving especially good at clear-eyed narration.

An unusual L-shaped audience in the Courtyard Studio made you want to come back and see it from the other point of view. The focus on the young women trying to forge their own paths by going into the woods away from those who would tell them what to be was powerfully shown.

I’d have to put “Jekyll and Hyde” in the workshop theatre basket; audience participation was not only positively encouraged but also seemed to be the subject of some pre-show selection. Robert Louis Stevenson came somewhat second but the piece had control, a bit of elegance, atmosphere and humour. Wild costumes, theatrical trickery and wonderful timing.

Out of New Zealand and rather enjoyable. And it also showed what a flexible performance space the Bicentennial Hall has now become. It slimmed down to accommodate a traverse stage with very little awareness of the large spaces surrounding it. I may not be calling it a barn again. 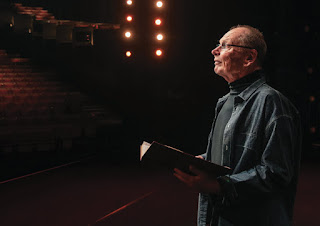 John Bell arrived on the stage of the Playhouse with a comfy armchair and not much else was needed for his one man ramble through some of his favourite bits of Shakespeare.

“One Man in His Time” was quiet, good humoured, perceptive and not too schoolmasterish bit of teaching and sharing that a large audience thoroughly enjoyed.

But it was Robyn Nevin who floored audiences with Christopher Hampton’s “A German Life.”

Based on the memories of German woman Brunhilde Pomsel, born in 1911, dying at 106, it mapped the century in her life. it posed the question of the ‘ordinary German’ - what would you have done in mid twentieth century Germany, mummy? 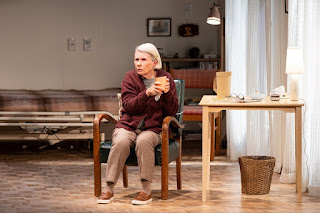 Answer, go with the social flow and hone the shorthand skills which were a meal ticket in hard times but which led to working for Dr Goebbels… I did wonder how it might have gone on an utterly black stage with just a chair and a glass of water but the nursing home surroundings were the banal reality and served as a good background for pale projected snippets of devastating old newsreels.

Nevin herself was that reality and utterly convincing as the old woman reviewing her life and the way in which she ended up part of the tragedy. Hard to withhold a certain sympathy but hard not to judge such blindness. And be careful where shorthand skills might lead you…

John Bell and Shakespeare, “One Man in his Time,”  Canberra Playhouse, April 14-15.

“ A German Life” by Christopher Hampton. Directed by Neil Armfield. Canberra Playhouse,   May 11-16.