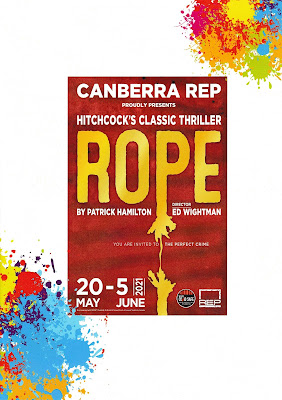 Patrick Hamilton’s, ‘Rope’, is probably best known from Alfred Hitchcock’s 1948 film of the play set in the USA.  Director, Ed Wightman, keeps the Canberra REP production of the play in its original time and setting – 1929 Mayfair in London.

The play may have been inspired by a celebrated murder case in the USA when two young men, Leopold and Loeb, performed a thrill killing in 1924.

In Hamilton’s play, two young men have murdered a fellow university undergraduate just for the fun of it.  The dominant one of the two men, Wyndham, believes that his superior intellect gives him the right to kill an inferior human being if he wants to.  The other man, Charles, is too weak-willed to do anything but go along with his friend’s scheme, despite major misgivings.

To add spice to their handiwork, they place the body in a chest and then invite some friends, including the dead man’s father, to a party with the chest and its contents serving as a supper table.

This isn’t a ‘whodunit’, it’s a ‘will they get away with it?’  Played straight through without an interval, the play builds its suspense slowly but surely.  It’s 90 minutes long but seemed surprisingly shorter than that.

The production is impressive for its recreation of the era of ‘bright young things’ – a phrase coined in Evelyn Waugh’s 1930 novel, ‘Vile Bodies’, to describe young, fun-loving, fashionable upper-class people of the 1920s.  They were noted for their exaggerated and mannered speech, often referred to as ‘camp’, as well as their superior airs and graces.

Pippin Carroll as Wyndham Brandon gives a top-notch performance as the dominant murderer, maintaining the ‘camp’ style of speech and behaviour throughout.  Josh Wiseman as the weaker murderer, Charles Granillo, also gives a fine performance.  Required to become steadily drunk and more emotionally troubled as the play proceeds, he keeps it natural and convincing throughout.

Alex McPherson as the party guest, Leila, also impresses with a strong performance with the right ‘camp’ sensibilities.  Rupert Cadell as the lame poet, Ryan Street, ensures that his strong character’s forthright manner is suitably irritating.  The rest of the cast - Callum Wilson, Saban Lloyd Berrell, Anne Freestone and Ian Russell - all give finely tuned and convincing performances.

The set designed by Quentin Mitchell nicely captures the period as do the multitude of properties by Michael Sparks.  Anna Senior’s period costumes are attractive and absolutely right for every character.  It’s good to see everyone, including the men, with the correct hairstyles for the era.

Advertising the play as ‘Hitchcock’s Classic Thriller’ and utilising music from Hitchcock’s films was the only false note.  Audience members giggled at the over-familiar main title music from ‘Psycho’ at the opening of the play.  The other music sounded Hollywood melodramatic and out of place.

Apart from that, the Director, Ed Wightman, has shown with this production that a classic play from the past can still work and entertain without feeling outdated or altered for ‘relevance’.