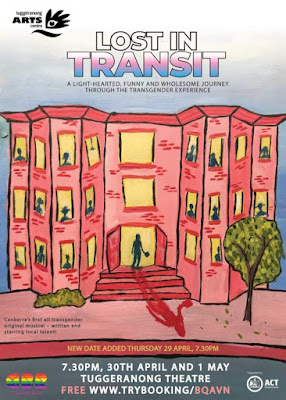 Written by Kat Reed and Company

Tuggeranong Arts Centre to 1 May

“Lost in Transit” is billed as “Canberra’s first all transgender original musical”.

Hunter is a postman who is trying to deliver a mysterious parcel to a resident in an apartment block.  The recipient is hard to find and, on the way, Hunter interacts with various other residents, a transgender and gender-diverse group of people.  Their stories help him on his own voyage of self-discovery.

Developed by the director and cast, the story gives an insight into the lives and experiences of transgender and gender-diverse people.  The characters are warm and loving, funny and eccentric with moving stories of hurt and prejudice to tell.

The musical numbers are mostly pre-existing songs from a range of genres that were chosen and arranged in collaboration with musical director, Dianna Nixon.  They help to underline the emotions of certain scenes as well as move the story along.

Supported by an ACT Government grant and presented to audiences without charge, the production values on the show are understandably minimal.  The cast have been drawn from a range of backgrounds and performance genres.

The play has a valid message for its audience and the rough and ready production has a winning charm.  It takes courage to get up on stage to act and sing and, what these performers lack in formal training, they certainly make up for in heart-felt enthusiasm, telling their stories with knowledge and conviction.

The warmth and commitment of these performers was easily transmitted to their appreciative audience.  The strength of applause at the end of the show demonstrated that their message was understood and well-received.

This review was first published in the Canberra City News digital edition of the 30th of April 2021.