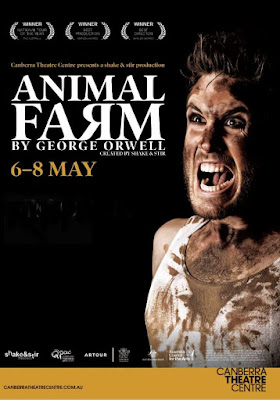 Canberra Theatre Centre Playhouse to 8 May

George Orwell’s novella, “Animal Farm” may be 77 years old now, but its message is still relevant today and maybe more so.  Just think of Donald Trump’s “fake news”, the North Korea of Kim Jong Un, the frightening persuasiveness of our social media and so on.  If you feel uncomfortable watching it, it’s because the events portrayed are not so far from our current world.  Shake & Stir’s theatre production is bold and breathtaking, capturing the spirit of the story in theatrical terms extremely well.

A group of farm animals rebel against their human farmer, hoping to create a society where the animals can be equal, free and happy. Ultimately, however, the rebellion is betrayed, and the farm ends up in a state as bad as it was before, under the dictatorship of a pig named Napoleon.

The decision to present the animals with minimal props and costume pieces for identification means the actors must convince us with their performances.  Slipping in and out of characterisations to be narrators as well as animals is a gamble that might not have worked, but it actually adds to our willingness to accept the characters and incidents played out before us.

The actors are totally convincing as the animals.  The ensemble playing of Darcy Brown, Tim Dashwood, Nelle Lee, Gideon Mzembe and Steven Rooke is truly remarkable.  It’s hard to believe there are only five performers playing a multitude of different animals with such in-depth characterisations.  It’s a very physical, fast-moving production requiring timing, energy and stamina. They must be exhausted by the end.

Josh McIntosh has designed an attractive, towering set with all the elements of a typical old farm against which the chilling events play out.  The complex lighting design by Jason Glenwright adds to the atmosphere as does the extraordinary sound design by Guy Webster.

Director, Michael Futcher, has made all the right decisions with this outstanding production.  It’s terrific theatre – visceral, thought-provoking, visually startling and entertaining – and it’s not to be missed.

This review was first published in the Canberra City News digital edition of the 7 May 2021.