FOXHOLES OF THE MIND

FOXHOLES OF THE MIND. 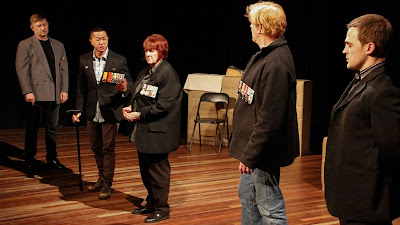 Playwright Bernard Clancy is a Vietnam veteran, whose struggle with Post Traumatic Stress Disorder and subsequent capitulation to its devastating effect prompted him to write Foxholes of the Mind.  The play is a compelling account of the terrible torment suffered by returned soldiers from the horrors of war. Inspired by Clancy’s insightful and heartfelt account of the impact of this disease, the professional cast deliver a performance that is as sensitive as it is confronting and as thought provoking as it emotionally powerful. War’s consequence is not regaled in glory, but shrouded in physical, emotional and psychological pain. Clancy presents the true effects of war upon the returned servicemen and women. Frank (Peter Finlay) is persuaded to attend a therapy session, conducted by psychologist Mark (Victor Gralak.) The session is also attended by Mario, played by Adrian Mulraney who deftly takes on a jacket and a walking stick to present barrister, Harry, and Ginger Mick. Former nurse, Sheila (Maureen Hartley) joins the group and Mark is assisted by his colleague Nigel (David Lih) a Vietnamese born boat refugee and Afghanistan and Iraq veteran. Clancy cleverly includes the younger as well as older veterans to illustrate the cruel impact of PTSD on all service people.

The irony is that many, including Clancy and his central protagonist Frank believe that they have overcome post traumatic stress disorder, only to succumb to alcoholism, domestic violence and suicide.  Clancy draws back the curtain on a disease that, like a cancer,  spreads throughout the lives that come in contact with the veteran. Frank’s wife Trish (Joanne Davis), no longer able to cope with Frank’s erratic behaviour and violent outbursts  is forced to leave her home and move with her disabled adult son into her daughter’s small  apartment.  The play moves  between the home, the clinic and the occasional flashbacks to the horrific circumstances on the battlefield.  Through it all, the complex struggles to survive the ordeal reveal a truth that director Wolf Heidecker neither glorifies nor embellishes. The drama’s authenticity is its most effective communication. Nowhere is this more poignantly revealed than in the final scene between Trish, Frank and Mark. Joanne Davis gives a most heart wrenching performance as she reveals Trish’s suffering and longing for the love of her childhood sweetheart, whom the army trained to kill, dehumanised and then neglected when their active service was done. It is a cruel indictment of an institution and a society that has lost the art of compassion. Bernard Clancy raises the art to its rightful place with Foxholes of the Mind

For those who suffered the terrifying ordeal of war, Foxholes of the Mind offers catharsis and an avenue of hope. For those who have lived with the consequences of life and friendship with the returned veteran, Clancy’s revealing drama offers an education in empathy and understanding.

Having been performed in Melbourne, Adelaide and Canberra, the national tour moves to Hobart, Newcastle and Brisbane. For those who are able to see Foxholes of the Mind, I recommend the play highly, not only for its moving theatrical impact, but because of its message of help and support. For those who are not able to attend I strongly recommend Peter Yule’s comprehensive account of the medical and psychological impact of the Vietnam veteran’s experience in “The Long Shadow”.  I am left with the reminder of World War VC winner and husband of novelist Katherine Susannah Pritchard , Hugo Throssell, who took his life after his return from the Great war. A century later the horror of war’s devastating human damage remains. It is because of this that Bernard Clancy’s account is must see theatre. Best we never forget!


Posted by Canberra Critics Circle at 11:06 AM