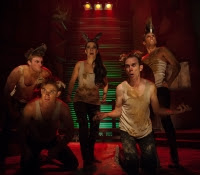 In his classic and prophetic allegory Animal Farm, George Orwell has revealed the terrifying truth of German philosopher Georg Friedrich Hegel’s claim that “The only thing we learn from history is that we never learn from history.”   Shake & Stir Theatre Company has earned a well-deserved reputation as a company that creates provocative theatre and the current revival of their acclaimed production of George Orwell’s Animal Farm attests to this dynamic commitment. From the startling opening silhouette of a slaughtered and carcass-hoisted lamb against a blood red spattered backdrop, the scene is set for an uncompromising commentary on fascism and dictatorship.

Published at the close of the Second World War in Europe, ostensibly as an indictment of the Soviet revolution, Orwell’s novella was ironically subtitled A Fairy Story. And yet, Shake &Stir’s gripping portrayal of sinister ambition, corrupt power, brutal subjugation and cruel irony reverberates with a resonance that is both terrifying and glaringly topical. The misinformation and spin of Squealer (Darcy Brown ), sidekick to the leader, Napoleon (Stephen Rooke) also provides a thinly veiled reference to Hitler’s Minister of Propaganda  Joseph Goebbels . Even today the world witnesses one man’s lifelong assumption of supreme power, the alteration of the law by another to extend the hold on power and the fearful iron grip of another on dictatorship. Shake & Stir’s Animal Farm is a chilling reminder of the dangers of allowing ideals to be distorted. The animal revolution that saw Farmer Jones expelled from Manor Farm and taken over by the animals also sowed the seeds for the rise of the pigs under Napoleon and the enslavement of  the other animals in the tarnished name of loyalty.

A tightly knit ensemble of five actors under the feisty direction of Michael Futcher  act as narrators and chorus to this sad history as well as changing seamlessly from narrators to animals through swift changes in simple costume items and physicality.   Set designer Josh McIntosh ‘s vast and towering Barnhouse setting is vividly accompanied by Jason Glenwright’s atmospheric lighting and Guy Webster’s  powerful sound design. The production weaves a drama of reflective sobriety, helpless anguish and skilful versatility. All in all Nick Skubij’s adaptation is a masterful piece of story-telling, engaging in its dramatic impact and concise enough to highlight the irony and tragedy of Orwell’s  visionary warning.

An excellent cast make the production accessible, engaging and entertaining. There are impressive performances from Gideon Mzembe as the loyal, hard-working Boxer and Brown as the despicable spinner of fake information, Squealer. Rooke captures the fanatical lust for power of Napoleon and there are gentler aspects to the oppressed animals in Nelle Lee’s Clover and Tim Dashwood’s Benjamin.

The ultimate irony of corrupted ideology is played out with ominous foreboding in the closing silhouette as human and pig cement the final dissolution of Old Major’s democratic dream . Shake & Stir Theatre Company once again tackles themes of great import with theatrical flair, energy and insight. Casting the mind back, it is difficult not to beg the question, “So what has changed?” It is why Orwell’s Animal Farm and Shake & Stir’s simple but powerful adaptation continue to have such relevance.