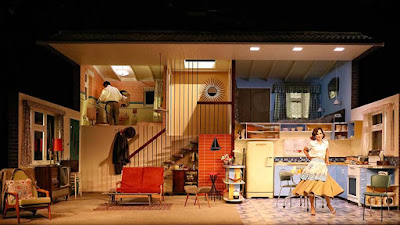 Be careful what you dream for. Ever since her childhood Judy (Andrea Demetriades) dreamed of living in the era of the Fifties. Her romantic notion, shared with her compliant husband Johnny (Anthony Taufa), created a home beautifully and authentically designed by Genevieve Blanchett and   surrounded by  the furnishings and trappings of the Nineteen Fifties.  Audiences of the Sydney Theatre Company’s production of Home, I’m Darling who lived through the era could well be caught  up in the nostalgic sight of half curtains strung across the window above the kitchen sink, the chequerboard linoleum patterns across the kitchen floor, Cornish ware on the shelves and a record player upon the living room cabinet. And yet, playwright Laura Wade’s satirical glimpse of that bygone decade sparkles with irony and contradiction. A laptop sits on the kitchen table and Johnny still requires a mobile for his job as a real estate evaluator.A frivolous, flippant and illusory veneer conceals the hidden social truths of struggle, deprivation and marginalization that existed to preserve the glossy, innocent picture of perfection. When Judy takes advantage of an unexpected and generous  redundancy package to fulfill her dream and become the home loving, husband serving housewife , blissfully oblivious to the outside world, reality rears its menacing head and the dream begins to shatter. Financial woes and  suspicious jealousy intrude on this ideal picturte perfect world and Judy and Johnny are both forced to confront the reality of survival in a time far removed from Judy’s romantic of life before she was born.

Director Jessica Arthur and her outstanding cast embrace Wade’s pragmatic cynicism with relish. The production encapsulates with incisive accuracy the custom and social mores of the time. It is there in the lively, escapist jive routine by friend Marcus (Gareth Davies) and Judy, energetically choreographed by Leslie Bell. It is there in the hors D’ oeuvres platter prepared by Judy for Johnny’s boss Alex (Kirsty Marillier). And it is there in Blanchett’s costume designs. For me, it is a journey back in time and a stark realization, so graphically pointed out in Tracy Mann’s powerfully delivered monologue as Judy’s mother Sylvia, that I too was unaware, as a youth, of the queer, the coloured, the indigenous, the homeless and the very poor.  Wade’s thought-provoking play shines a harsh light on an insensitivity that still demands scrutiny in our present day. The microscope on romantic notion may just burn away the fantasy and expose the underbelly of society’s underprivileged.


Director Arthur tears down the white picket fence of nostalgia.  Her direction highlights the escapist artifice of misconceived  idyll while compassionately arousing the confidential intimacy between Judy and her close friend Fran (Chantelle Jameison) Neither Wade nor Arthur avoid the gentle glory of indulging in sentimental nostalgia. It is the retreat from reality that is under attack and Judy and Johnny are finally forced to discard the agrophobia of their fantasy and accept the wporld beyond their front door.  This splendidly cast production,d irected with flair and insight holds a mirror up as much to our present time as to the harsh realities of an era that painted a picture of perfect harmony while concealing the discord beneath. The light that Wade casts on her English experience is as much a searing  light into this country’s  obsession with a fanciful and whimsical past.  It is Sylvia’s confrontation with reality that serves to jolt Judy from delusion and thrust each character forcibly into acceptance of their reality.

Home,I’m Darling was scheduled to open when Covid struck and the opening was  delayed for a year. Since then the play has resonated even more strongly with the recent awakening of  sexual misconduct and harassment and a movement to expose and change an inglorious past, Home,I’m Darling inverts the stereotypical notion of an hierarchical society in a production that is refreshingly honest, intellectually challenging and thoroughly entertaining.  If you are in Sydney before May 15 don’t miss this. It will change the way you think about the past.