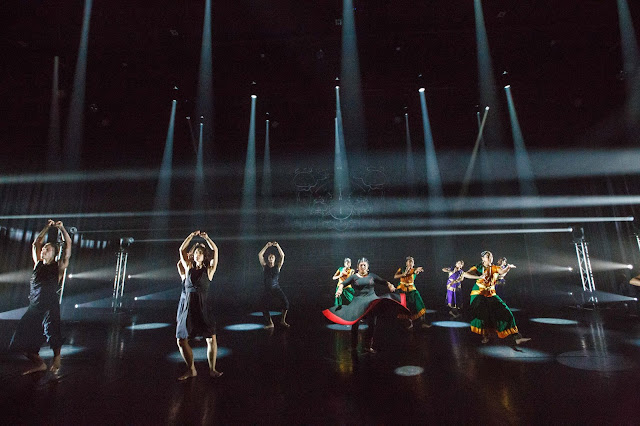 Since settling in Canberra in 2000, Liz Lea has quickly established herself as an outstanding contributor to dance in Canberra. Much admired as a dancer, choreographer and mover and shaker, her innovative dance works have won awards and attracted International attention for their originality and innovation.

“The Point” which premiered at the Belconnen Arts Centre last night is another in a long line of memorable creations by Lea.

Unfazed when her original concept for “The Point” as a collaboration with Singapore’s Maya Dance Theatre was stymied by Covid-19 travel restrictions, Lea simply to turned her gaze inwards to the local Indian Dance community to bring her concept to fruition, and in doing so has uncovered a treasury of classical Indian dance which she has incorporated in her compelling new dance work.

Conceived as a celebration of the 150th Anniversary of Marion Mahony Griffin and her contribution to the design of Canberra, and the Indian connections of the Griffins, Lea has taken the interconnection of design, movement and music and the notion of “Bindu”, the point of creation in Hindu mythology, as the focus for her work.

However you need know none of this to appreciate this brilliant creation.

Combining the skills of six classical Indian dancers expert in Bharata Natyam, Kathak and Kuchipudi dance styles, with those of six individually chosen contemporary dancers, Lea has created an extraordinarily cohesive dance work, beautiful to look at, and compelling and exciting in its execution.

Other dancers take the stage, all costumed individually in black. Elegant body-revealing styles for the contemporary dancers and variations of traditional Indian styles for the Indian dancers. Dramatic shards of light from above and across illuminate the dancers as they perform complex choreography, athletic and exciting, some obviously based on Indian styles but given a contemporary twist, executed with precision and purpose by the entire company.

The entrance of Ira Patkar, also in black but with bright red trimming on her costume and with her hands and feet dyed red, introduces the first colour into the costumes. Patkar performed a whirling Kathak dance while the others continued their variations.

Seamlessly interwoven throughout are a continuous stream of solos, duos and ensemble dances highlighting the individual skills and virtuosity of David Huggins, Nicholas Jachno, Billy Keohavong, Eliza Sanders and Jareen Wee, each of whom impressed with their mastery of the complex Indian inspired choreography, as did their Indian counterparts with the contemporary elements.

By combining these disparate elements with  taste, respect and flair,  Liz Lea has created an important, highly original and accessible dance work which deserves to be seen by a much larger audience than will have the opportunity this short season.