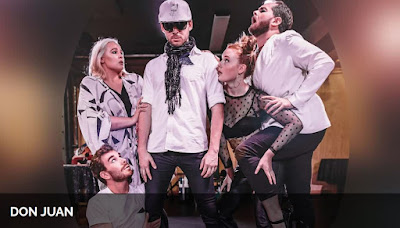 Bicentennial Hall, Queanbeyan to May 16

‘Don Juan’ is a zany, fast-moving show that uses improvisation, farce and audience participation in its non-serious re-telling of the story of the world’s greatest seducer of women.

You don’t get much story in this show and it’s clearly not important.  It’s just an excuse for a bit of mindless entertainment with an energetic group of performers using funny voices, shouting a lot and involving audience members as much as possible.  They call it ‘an immersive comedy theatre event’.

Performed in an acting space between two rows of seats facing each other, the cavernous Bicentennial Theatre’s echoing acoustic made it difficult to hear what they were saying most of the time.  The cast talk fast and use funny French accents so you’re really up against it trying to follow what plot there is.  It was easier to just give up and watch the visual aspects of the show.

There doesn’t appear to be any good reason for it, but everyone takes turns playing Don Juan, even an occasional audience member.  He (or she) is the one wearing the baseball cap and dark glasses.  If there were other characters, it was hard to tell and it didn’t really matter.

Working hard to be funny just for the sake of it wears thin very quickly and there was a certain tension in hoping you wouldn’t get involved in any of the audience participation.  The musical moments were the best.  The cast can certainly sing and it’s a pity there wasn’t more of that.

There was no program so the hard-working cast can’t be named specifically.  A search online shows they were drawn from a pool of performers: Samuel Austin, Susie Berry, Jack Buchanan, Andrew Paterson, Jonathan Price, Comfrey Sanders, Hayley Sproull.

‘Don Juan’ won the Judges Excellence Award at the Auckland Theatre Awards in 2016.  The show ran just under an hour.  It was long enough.

Posted by Canberra Critics Circle at 10:46 AM