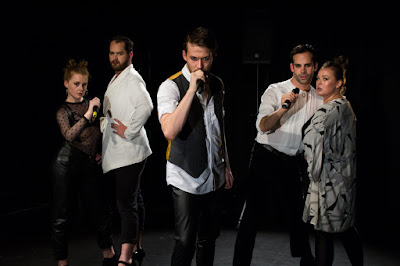 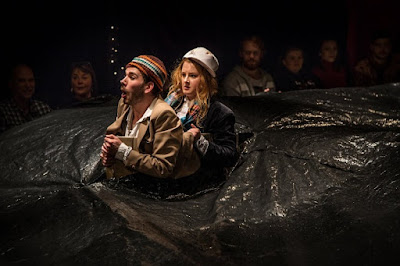 Slightly Isolated Dog Theatre Company’s Home Page promises “Comedy, Chaos, Participation and Delight”. Formed in 2005 with a mission to create new devised theatre, the five talented but somewhat erratic actors live up to their promise. In the Bicentennial Hall annex of The Q Theatre in Queanbeyan the audience is welcomed to the company’s variation on the Don Juan story by the actors. The publicity forewarns of immersive theatre and I quake at the prospect of that old chestnut, participatory theatre, the dreaded unknown into which the wary traveller must roam at his or her peril and the whim of the merry band of actors.

The hour long show traverses the devilish and decadent exploits of Don Juan from seduction and  duelling to the inevitable conflagration in the fiery flames of hell.. On the way, audience members react and interact as characters, forests, and participants in the action. It’s all done in good fun, nothing too serious and with none of the debauchery of the legend of the hyper-testosteroned lover of other men’s wives and widows, pious nuns or perhaps an occasional member of his sex for dalliance and experimentation. Each actor assumes the character of Don Juan at some stage while fellow actors people the stage with the victims of seduction or the  rivals and opponents. With seating on each side of the space and the actors within easy reach of the unwitting audience members, the unfolding story is played at a fast and furious pace, interspersed by songs, sung with force and panache and definitely the highlight of this picaresque adventure. 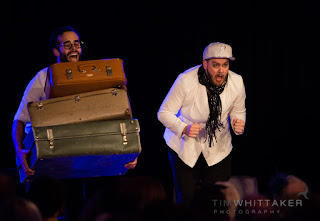 Ultimately, this youthful and energetic company from New Zealand bounds through a theatrical adventure that smacks of drama school workshops. There is a Godspell feel to the show – a series of moral parables linked by excellent musical moments, uttered in wildly unauthentic French accents and clownish posturing. Clearly members of the audience appeared to be having a good time, letting themselves go and entering into the spirit of this farcical frolic.

Slightly Isolated Dog’s Don Juan reminds me of what I would call Opportunity Theatre, that is theatre created by drama school graduates who, rather than wait for the phone to ring, decide to create their own company, devise their own work and take it on tour. It shows courage and initiative, and there is no denying that there is real talent in the company, if onLy it was given the material and the direction to help it shine.

There are audiences that will lap up this irreverent romp. School students taken to a Slightly Isolated Dog performance will have a ton of fun and hopefully engage in a  more serious examination of the themes during a Q and A.

If you do decide to take the plunge into that impulsive and daring realm of immersive participation  or attend their other quirky take on Robert Louis Stevenson’s Jekyll and Hyde be prepared to leave your intellect behind and simply revel in the freedom to have fun. After all, it is only an hour of abandonment and not all theatre needs to be serious. This Slightly Isolated Old Dog has some old tricks to show and if you’re in the mood you may still delight in the comedy, chaos and participation.