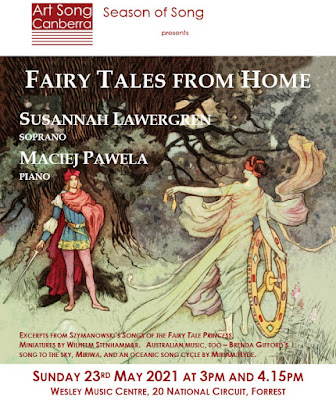 For Art Song Canberra, in a program alive with atmosphere, soprano Susannah Lawergren and pianist Maciej Pawela presented songs by four very different composers under the title of “Fairy Tales From Home”.

Lawergren explained at the beginning of the concert that the songs could be seen as metaphors for aspects of the natural world – sky, sea, animal and bird life, seasons and the moon and stars.

Commencing with “Mirlwa” (Sky) by Australia’s First Nation composer, Brenda Gifford, the soprano started this journey through nature with soaring and sustained high notes that seemed effortlessly sung.  It was the perfect opening for the concert and a taste of what was to follow.

This was followed by “The Nightingale” which was a perfect choice for the soprano’s crystal clear voice.  Maciej Pawela gave a very sensitive accompaniment for this song.  The third song was the atmospheric “Song Of the Wave”, given a perfectly judged, wistful performance by Lawergren.

Australian composer, Miriam Hyde, and her “Tone Poems Of the Sea” was given a sensitive performance with “Deep Lies An Ancient Wreck” the standout in both voice and accompaniment.  Singing in English, Lawergren demonstrated her remarkably clear diction.

The concert concluded with a set of five songs by Sweden’s Wilhem Stenhammar.  These songs covered a range of human emotions and were beautifully sung.  The second song, “The Girl On St John’s Night” and the final song “In the Forest” were the highlights of this set.

This well-planned program was given a superb performance throughout.

This review was first published in the Canberra City News digital edition of the 24 May 2021.