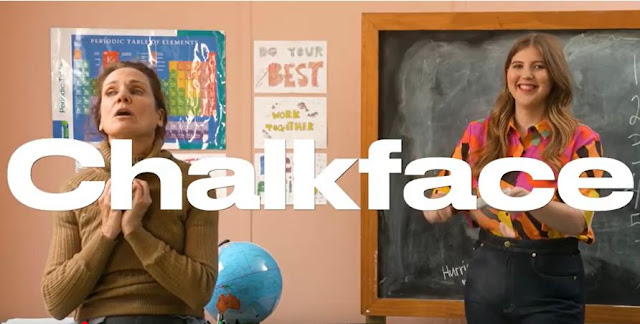 This play premiered at The Dunstan Playhouse, Adelaide On 9 August 2022
Supported By Simona Kamenev

“You must be mad to be a teacher”, since as everybody knows since my favourite playwright George Bernard Shaw said, “those who can’t do, teach” with its rather cynical corollary, “those who teach, can’t do”.

Chalkface, which includes this joke, is a farcical representation of a primary school teachers’ staffroom, over the year in which their most experienced teacher of twenty years’ standing, Pat Novitsky, engineers her departure when Hurricane Little is made to repeat Year 6, in her class, because he is too immature emotionally to start high school.

At this point I diverge temporarily while you check my correct use of the apostrophe, and note my minor lapse of style in my first sentence.  Pat makes the point that learning grammar is essential.

No farce is capable of providing solutions to real world problems, but the good ones – like Chalkface – can bring everything up (rather like the unfortunate child I saw this morning who spewed all over the bakery doorway).  Chalkface is more than suitably spewy, getting more and more madcap until its explosive penultimate scene (thanks to Hurricane Little and/or perhaps Devon’s father, the parent from hell).

The short reflective scene as Pat says farewell just before the final mayhem allows us briefly to return to sanity after experiencing the funniest play I’ve seen in years.

The top quality of Sydney Theatre Company’s actors was demonstrated especially by the understudy Ana Maria Belo who had to come on at very short notice because of Catherine McClements’ illness.  Not a beat was missed, as far as I could see, despite a terrifyingly complex array of actions and responses, let alone words, and the full-farce panoply of startling entrances and exits that all characters performed.

Beyond the apparently very ordinary staffroom set was an extraordinary sound and lighting design which, I feared, would light up literally as thunder, lightning and explosions became the order of the day.  But in the end applause, whoops and whistles won the night.  No worries.  Just enjoy – and have a few thoughts about what it’s really like to be a teacher.