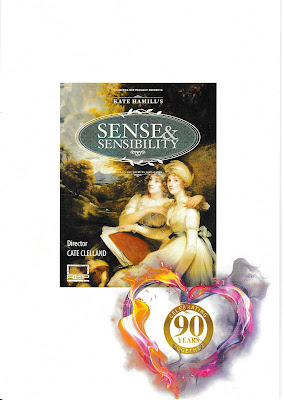 From the novel by Jane Austen

Jane Austen’s first novel, published in 1811, becomes the basis of a 2014 play adaptation by New Yorker, Kate Hamill.  Following the fortunes of the Dashwood sisters shortly after their father’s death leaves them in a precarious financial situation, the play is a comedy of manners as the sisters find their way through romance to happiness as the gossips look on, ready to criticize their every move.

Apart from the sisters, Elinor and Marianne, the large cast play the ever-present gossips when they are not playing the many minor characters.

The sisters themselves are very different personalities, the sense and sensibility of the title.  Marianne, played by Annabelle Segler, is excitable and impulsive, while Elinor, played by Karina Hudson, is the more sensible and logical of the pair.

The play is cinematic with a large number of small scenes.  The action moves back and forth between various houses, both lived in and visited.  In director, Cate Clelland’s production, the action becomes claustrophobic with the sister’s constantly aware that they have little privacy and that everyone is watching and waiting for them to slip up.  Reputation in this society is everything.

Karina Hudson gives a fine performance as the sensible Elinor.  Annabelle Segler has the difficult role of the excitable sister, Marianne and handles it mostly very well.  Some more light and shade in her portrayal would have made her less irritating.

Ros Engledow captures the sense of period very well as Mrs. Bennett, whose house is visited by the sisters.  John Whinfield as Edward Ferrars and Sean Reeve as Colonel Brandon, the intended love interests, are not very interesting characters but the actors do the best they can with them.  The rest of the large cast give uneven performances.

The frequent changes of locale and the moving of furniture to set each scene quickly became tiresome even though it was choreographed very well.  It was just happening too often.  The cast playing the gossips, placed in the background of every scene, while dramatically valid, were often distracting.

Overall, the play works in its depiction of the society and the manners of the time.  There are amusing moments and it’s costumed very well by Anna Senior and her team.

If you’re a Jane Austen fan, you’ll have a good time with this.