A Flowers Of Peace production

An extraordinary event in its scope and size, the message of the “POW Requiem” is that only through forgiveness can we find peace.  Remembering those families whose lives have been deeply affected, there is hope the harm that was done by World War 2 can be repaired.

This epic concert showed all perspectives, through the power of music and imagery, creating a deeper understanding of the stories of Prisoners of War from WWII, particularly those held captive in Asia.

Directed by Christopher Latham, Artist in Residence of the Australian War Memorial and director of the Flowers of Peace project, it was a massive undertaking.

Latham brought together not only the Canberra Symphony Orchestra but also several choirs of adults and children, soloists including Susannah Lawergren, soprano, Andrew Goodwin, tenor, Neil Pigot actor, musicians on Japanese instruments and others too numerous to mention.

Specially commissioned musical works were by several of Australia’s contemporary composers including Andrew Schultz, Elena Kats-Chernin, Graeme Koehne and Jonathan Mills. The entire stage was filled to capacity and was an impressive sight. 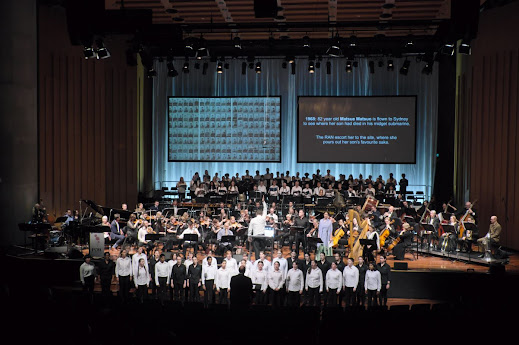 The concert began with the first movement of Erwin Schulhoff’s Symphony No. 8 and signalled the start of the war.  It was particularly poignant to know that Schulhoff is considered the most important Jewish composer killed in the Holocaust.  The music’s ominous, driving sound was accompanied on large screens which gave images, information and statistics of early campaigns.  The number of POWs was already steadily climbing.
The first act of the concert’s music focussed mainly on musical works by prisoners and POWs on all sides in Europe and Australia.  The experiences of Italian, German and Japanese POWS in Australia were shown including the Cowra Breakout, the detail of which was particularly moving, the Dunera Boys, wartime escapes, a women’s POW choir and the little known detail of the POW “universities”.  Music by Britten, Bischofswerder, Chopin, Debussy, Messaien and others was heard while the statistics of this war continued to climb.

The second act focussed on POWs in Asia including the fall of Singapore, The Thai Burma Railway, The Rōmusha – Asian Civilian Labourers, the entertainers of the POW camps and mateship.  The role of priests and medical personnel, starvation and the thought of going home were movingly detailed.

The statistics continued to climb and it was sobering to remember that these were not just numbers – they were all real people.

It all led to a powerful finale with Paul Mealor’s “The Tears Of Forgiveness” and Ross Edwards’ “Celestium”.

With a heightened awareness of the sacrifices made by the men and women on all sides of the war, the healing power of music and the sense of forgiveness, this concert achieved its goal and its message will never be forgotten.

This review was first published by Canberra CityNews digital edition on 30 October.