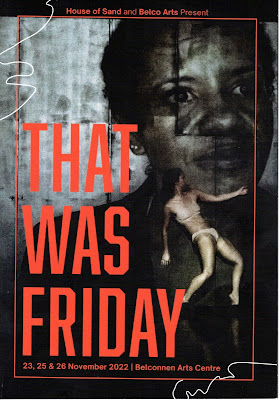 Since I found most of what I was watching and hearing, on stage and on video, was incomprehensible, I can only tell you what it was supposed to be about by quoting the published program, which begins with the first spoken words:

“ We are shaped by the people closest to us.  Our blood family, our chosen family.  What happens when those connections become strained?  A mother desperately tries to keep her family together.  A son discovers the blinding force of love.  A daughter grapples with a life-altering surprise.  An artist lives in exile, their identity a crime in their homeland.  Through both autobiographical and fictional narrative, each asks the same question: how do we honour our past, while appreciating who we have become?”

Darkly humorous, joyful, and visually stunning, That Was Friday will take your heart and squeeze it.

My heart wasn’t squeezed, but my brain was twisted, trying to work out whether there was any point in keeping on watching.  After Part 1 Family (the dickhead with the phone appeared to be one member); a literally three-minute break (had the equipment broken down for real? – I couldn’t tell, but apparently not because the Short Break appears in the program); Part 2 Society, which at least had an Armenian history (the massacre of millions) and a person going through sexual transition, where discrimination and fear of genocide were real issues; and, after a standard interval, back in Part 3 to Beginnings – apparently about the two years of this ‘project’ up to when somebody said they couldn’t continue with it.

This apparently happened at the time when Part 2 ended.  So Part 3 was about what didn’t happen to get completed.

By the end of  Part 3, though, I at least understood that the ‘Mum’ of the first quote had fallen off her excercise bike and died.  I also began to gather that because everybody on earth is different, and no-one can really understand anyone else, since they haven’t had the same life experience; and that no-one can really even understand themselves and be sure of what it means to say ‘I am …..what my past says I am / what I have become’; then I may as well conclude that watching for two and a half hours (including interval) was really pointless.

So the best I can say is that this project is just a company doing art for art’s sake, claiming in their program that by “Layering dance, theatre and video, this ground-breaking new work fills the gaps between these art forms to create something entirely new”.  Well, the dance was largely what my family call ‘writhing’; the theatre entirely lacked any drama; the video was big and unavoidable (which meant my attention was often taken away from the ubiquitous dancing).

And now I’m even unsure what ‘ground-breaking’ means any more.  It seems to be a House of Sand indeed.

But don’t let my opinion hold you back.  Go make your own judgement.