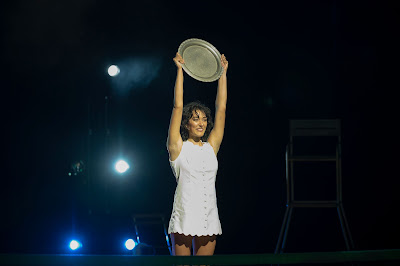 Written and directed by Andrea James

Evonne Goolagong was one of the world’s top tennis players in the 1970s.  How this indigenous girl got there from humble beginnings and went on to fame in the sporting world at a time of widespread prejudice in Australia is the subject of “Sunshine Super Girl”, written and directed by Andrea James.

Beginning and ending with a girl enjoying the simple pleasures of fishing on a river, the story shows her as a child in a large family living in a NSW country town in a house which just happened to have a tennis court out the back.  The help given her by locals to progress her tennis is acknowledged and the opportunity for her to move to Sydney must have been a wrench for her family.

Her success in tennis competitions is marred by an unwanted sexual approach from her coach, prejudice and comments like “bush baby” in the Press.  It all made her just play harder, going on to win the women's singles tournament at Wimbledon and being named Australian of the Year in 1971.  Her non-political stance on issues like apartheid in South Africa angered activists.  She just got on with her tennis, despite these pressures. 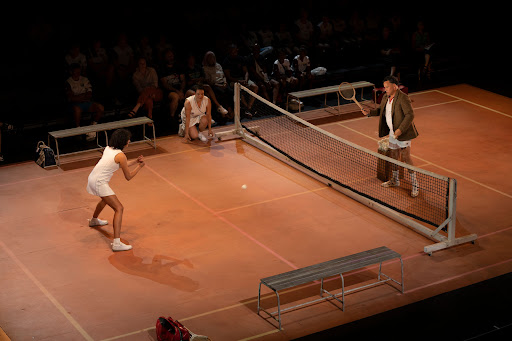 The production design of this play by Romaine Harper is a tennis court that fills the stage and the lighting design by Karen Norris is particularly effective in providing atmosphere and sense of place.  The direction by Andrea James is assured throughout.

The tennis is depicted in dance choreographed by Katina Olsen and Vicki Van Hout, giving it a dreamlike quality in keeping with Goolagong’s memories while fishing.  The cast of six perform it very well.

As Evonne Goolagong, Ella Ferris gives a charming performance as this woman who was never too far from her roots.  The rest of the cast play multiple roles in her story and are quite effective.

With a distinctively Australian sensibility and humour, this is a straightforward and entertaining telling of Goolagong’s story.  It is a celebration of spirit and passion over adversity, and a tribute to a woman whose sporting prowess continues to inspire a nation.  With its striking production and lighting design, it’s also good theatre.

This review was first published by Canberra CityNews digital edition on 3 November.