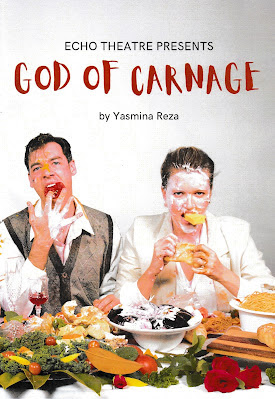 God of Carnage by Yasmina Reza. Translated by Christopher Hampton.

The word Carnage leaps out from the title of Yasmina Reza’s 2008 play God of Carnage currently showing at The Q Theatre and directed with razor sharp acuity by Jordan Best. The image of disembowelment, shredded  flesh and exposed carcass may be excessively grotesque to describe the meeting between two sets of parents to discuss the injury  to Henry, son of Veronica (Caroline Elwood) and Michael (Josh Wiseman) inflicted by a stick wielded by Benjamin, the 11 year old son of Annette (Lainie Hart) and Alan (Jim Adamik). The gentle strains of classical music open the show lulling an audience into a mood of soothing expectation. What evolves could not be further from the reality. Seated on the settees in Jens Nordstrom's comfortable middle class  Swedish design the parents ostensibly seek to reconcile the boys’ behaviour and arrive at a civilized and mutually agreed resolution to the regrettable incident.

Reza takes a theatrical scalpel to dissect the contradictions, fallacies and defensive offence of the human condition. What begins as a civilized discussion between the respective parent turns on a word, an accusation, a misinterpretation or a simple attack of indignation as Reza reveals  the  parents’ combative instinct . The civility of coffee and cake quickly degenerates into vitriol and recrimination. Veronica, a writer, writing a book on Darfur and the war in South Sudan shrieks with disdain. Michael. a self made wholesaler desperately seeks compromise against the odds. Alan, a high powered lawyer is glued to his mobile phone as he deals with a case and Annette, who manages her husband’s wealth is provoked to vomit. Christopher Hampton’s dialogue spits and snarls, unleashing barbs that tear at whomever may be the object of spite or derision. Audiences watch on as the roulette wheel of bitter argument spins from one parent to another, from husband to wife, wife to husband, spinning accusations stemming from a sense of protectiveness.    In a final exasperated act fuelled by fury and rum the play reaches a dramatic crescendo as Veronica empties Annette’s handbag across the floor and Annette tips the tulips onto the carpet.  They stand exposed, stripped of human civility and dignity, the detritus of their own emotional carnage. With poignant irony the lights fade as the classical music restores a mood of tranquillity.

God of Carnage is fly on the wall theatre. We are compelled to watch four human beings descend into a pit of childish unrestrained behaviour. There is an uncomfortable familiarity with no prospect of redemption.  Best and her excellent ensemble of four highly charged actors  display  the disturbing universality of  irrational response.  The timing is excellent, the relationships between each character perfectly  captured as interactions shift and sway from friendship to animosity and outright attack. Best’s direction never falters and the actors rise to the occasion. It is a pleasure to see the four actors sparking and sparring. Only Elwood’s vocal technique falters. The appropriate screeching as Veronica hits an emotional peak but  loses diction and her crucial opening and closing lines lack the necessary energy  of projection.

With startling and bizarrely comic effect each actor fully embraces Hampton’s spitfire translation. Hampton has translated a number of Reza’s plays including Art which was recently performed to acclaim at The Street Theatre. His dialogue, faithful to Reza’s spirit bursts trippingly off the tongue enabling each actor to convincingly embody character and the drama of the moment, illustrating the versatility of Best’s actors.

Reza’s black comedy is a professional production with a bitter-sweet bite. If your sense of the absurd enjoys watching people battle the slings and arrows of outrageous conflict then you are in for a great night at the theatre. And maybe the occasional squirm along the way. After all the course of true argument never did run smooth. Perhaps the secret is not to take this very clever, finely produced production by Echo Theatre too seriously. Rather sit back and delight in Echo Theatre’s night of fascinating taunts and turbulence.