RBG: OF MANY, ONE 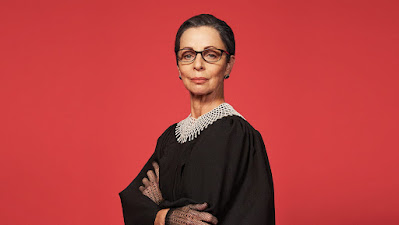 RBG: Of Many, One by Suzie Miller.

Heather Mitchell’s performance as Supreme Court Judge Ruth Bader Ginsburg in STC’s RBG: Of Many, One is pure perfection. Playwright Suzie Miller has crafted a theatrical eulogy as brilliant as Ginsburg’s legal mind. Director Priscilla Jackman’s tight and engagingly fluid production is as sharply staged and as clearly revealing and logical as Ginsburg’s judgements and battle for universal equality for women.

But it is Mitchell’s performance that places her at the very Pantheon of the actor’s craft. In 95 minutes of magnetic and unforgettable acting Mitchell bestrides the Wharf Theatre stage like the legal colossus that Ginsburg  inhabited upon America’s Supreme Court. We discover Ginsburg impatiently waiting for a phone call from President Clinton to confirm her appointment to the Supreme Court. Miller reveals a woman as human and as nervously expectant as anyone who might be awaiting  life changing opportunity. Throughout the performance Miller and Mitchell introduce us to a woman, who, in spite of her position, her indefatigable battles for justice, her courageous will to be true to herself, her profession and her mother’s early advice remains simply human. Her girlish passion and belief in what she knows to be right, her reliance on her mother’s wisdom, her girlish awe in the presence of a president, her victorious delight at every case that she wins and her resolve not to be cowed by defeat or confrontation all reveal an extraordinary woman who believed in what she knew to be right and dedicated her life to creating a better world for both men and women. 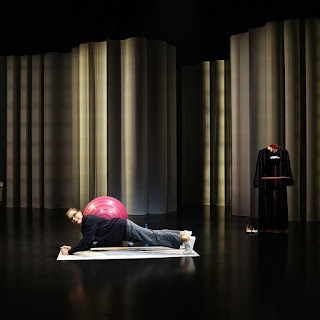 Mitchell’s astounding performance traces Ginsburg’s life over her childhood to her last breath in 2020. With only the occasional stage hand to pass her a prop or change a setting, Mitchell, chameleon like transforms from schoolgirl to young wife to feisty defendant, grandmother to the Associate Justice at lunch with Obama, in the court, at the opera or at her exercises. This is a panoramic account of a woman, whose indelible mark on the judicial system and humanitarian cause has left a legacy to inspire generations of lawmakers.

Miller does far more than make audiences aware of Ruth Bader Ginsburg’s  professional achievements, her generational contribution to legal reform and her elevated status to cultural icon. First and foremost Miller reminds us that Ginsburg, apart from her achievements in law was a human being. RBG: Of Many, One is a moving and heart -warming love story between Ginsburg and her husband, Marty. It depicts her joy at motherhood and her devotion to her grandchildren and their reciprocal love. We hear her admission of shame and guilt at her outburst against Trump, not because it is the natural reaction of a concerned American, but because of the conflict it exposes between her duty to the law and her professional responsibility to remain detached from the political process. However, Mitchell’s performance leaves one in no doubt. RBG was a compassionate, loving and also vulnerable human being. 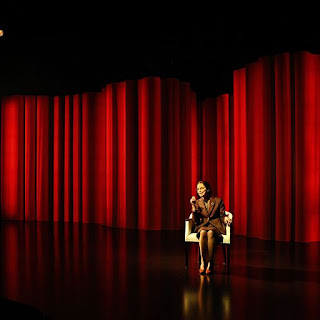 RBG Of Many, One is the supreme accomplishment of a triumvirate who ensure that Suzie Miller’s dramatic biography, Priscilla Jackman’s luminescent direction and Mitchell’s stellar and faithful performance coalesce to create a triumph for Sydney Theatre Company’s 2022 season. This is a production that must be seen, and I predict that other major state theatre companies and festivals will clamour to have this work in their programme. It is a tribute to the achievements of Ginsburg and to the artists that have all brought Miller’s play to the stage. Like Ginsburg, long may this production continue to inspire and illuminate the deeds and memory of RBG.