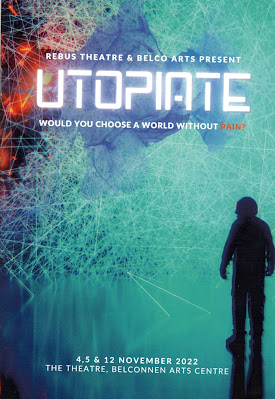 Utopiate devised and performed by the participants and directors of Rebus Theatre’s Flair program with the support of Belco Arts.


Rebus Theatre’s cast of disabled actors, and actors with lived experience of mental ill health, in their invention of the idea of a planet, Utopiate, of perfect happiness for the people of painful Earth to escape to, have echoed something of Shakespeare’s play The Tempest.  Utopiate begins with a storm of pain on Earth – of physical, social and emotional causes.  One could well be suspicious of the tv ad for space travel to Utopiate (is the non-human Thorax really Elon Musk in disguise?).

And indeed, life on Utopiate, even with the good intentions of the Alien locals, Mars Bar, Purple Raindrop and Silver Star, but run by the quite dictatorial Thorax Mansion, turns out not to be easy – especially when the Humans begin to feel homesick for the pleasant memories of the natural world on Earth.

And so the Humans return to Earth with a message very much like the youthful Ferdinand’s words when he has seen Miranda, but must ‘remove / Some thousands of these logs, and pile them up’ in the hope her father, Prospero, will accept him as her suitor.

“There be some sports are painful, and their labour
Delight in them sets off: some kinds of baseness
Are nobly undergone; and most poor matters
Point to rich ends.”

Working as a group to create their play, the Rebus team leave us with the question “Can we truly experience growth and love without adversity?”  Like Ferdinand, they have found the delight in working hard to experience rich ends.  And, like Prospero, Thorax has to accept that being a dictator of happiness is an unresolvable contradiction.  As Prospero tells his audience:

“Now my charms are all o’erthrown,
And what strength I have’s mine own;
Which is most faint.”

Despite the adversities that all the members of Rebus Theatre face daily, they have successfully created a play showing growth and love, tied together with a sense of humour.  Delightful theatre, in other words.