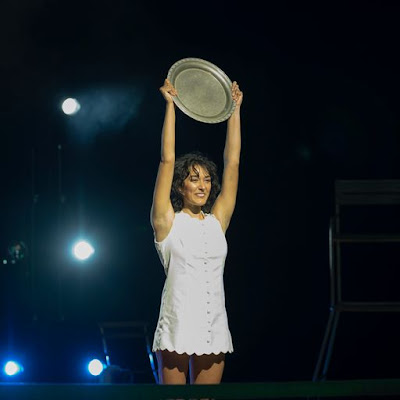 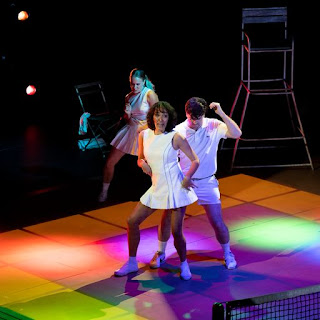 Performing Lines have served up an ace of a show with Sunshine Super Girl on tour at The Q Theatre in Queanbeyan.  Creator and director Andrea James has written a delightful and heart-warming account of the life and phenomenal tennis career o fAboriginal Australian sporting icon and trailblazer Evonne Goolagong. The play is essentially a monologue delivered with enormous appeal by Ella Ferris in the role of Goolagong. She is supported by other members of the company in various roles as members of the family and the local community, her coach Mr. Edwards, husband Roger Cawley and her competitors, including Chris Evert, Margaret Court nee Smith and Martina Navratilova. As well as Ferris in the title role, the cast includes Katina Olsen, Jacqueline Compton , Kirk Page, Lincoln Elliott and Sermsah Bin Saad. I have no programme to denote the roles they played but James has created a beautifully composed ensemble for a story that lifts the spirit and inspires admiration, pride and respect.  It is the story of “the babe from the bush”, the “sunshine super girl” who rose from humble beginnings and a loving aboriginal family to win 92 singles titles including the Wimbledon crown twice and the French and Australian Open.

James has created the drama as a narrative dance in which Ferris’s telling of Goolagong’s story is accompanied by carefully choreographed movement by Katina Olsen after Vicki van Hout’s original concept. Like the circular motif of an aboriginal work of art it weaves and spirals and occasionally pulses with the cut and thrust of the match.  At times other performers enter the narrative with short scenes between Goolagong and her family or awkward moments in the presence of coach Edwards or the developing love story, that leads to the romantic proposal by Cawley and the birth of their daughter, Kelly. Every short scene is a pivotal moment in this story of life’s amazing journey. 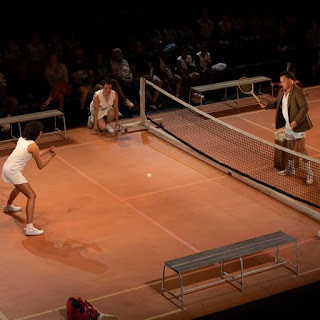 The episodes of Goolagong’s life from joining the Barellan Memorial Tennis Club at the age of seven to her Wimbledon victory in 1971 are played out on Romanie Harper’s design of a tennis court, complete with a revolving net and umpire’s seat and off court benches under Karen Norris’s  lighting design, assisted on tour by Ben Anshaw. At one stage the court evokes the patterns and moods of country . Every aspect of this production, including Gail Priest’s composition and sound design evoke a harmony  of action and emotion.

You will laugh at the playful antics of Goolagong’s family and siblings. The strong sense of community and love permeates the deep affection of family. You will cry at the moments of pain and sacrifice and loss and you will feel the immense sense of pride as Goolagong, a blak aboriginal girl from the bush makes her family, her mob and the nation proud. James has created a simple yet evocative tribute to a legendary aboriginal tennis player who forged a future path for her people and all women who aspired to strive with passion for their dream.

Sunshine Super Girl is a powerful tribute to all aboriginal people who have struggled and fought to give their people a voice. She strode the international tennis circuit at a time when the likes of Charlie Perkins, her idol Lionel Rose, Albert Namatjira and Jimmy Little were laying the path to recognition. She pioneered the opportunities for Cathy Freeman and Ash Barty. Sunshine Super Girl is not merely a fascinating and illuminating account of Evonne Goolagong’s life and career. It is a testament to all aboriginal people past and present who have made a difference and continue to do so across the world.

The performance that I attended was dedicated to the memory of 15 year old Cassius Turvey, murderously attacked while walking home from school. It is a chilling reminder of the heinous hate that still stains society and against which Australia’s indigenous peoples continue to struggle. Sunshine Super Girl lays no judgement. It is a beautifully staged tribute to a remarkable Australian sportswoman and champion. And yet there are lessons for us all to learn.

“Why me?” Goolagong asks in James’s play. It is a question we may all ask when urged to act for change. Goolagong’s final words at the close of Sunshine Super Girl provide the answer- “Why not.”