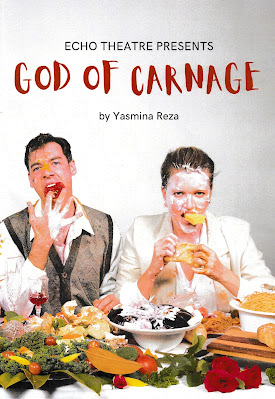 Originally a French play first published in 2008, ‘God Of Carnage’ has gone on to great acclaim internationally.  It was filmed as ‘Carnage’ by Roman Polanski in 2011.

Two couples meet to discuss an incident where their sons have been involved in a fight, leaving one of them with two teeth damaged.  The evening starts well over coffee and clafoutis as the couples try to discuss the incident involving their children in a civilised manner.  It quickly degenerates into a series of irrational and, at times, childish arguments.

The play shows that the veneer of civilization is just as wobbly as a clafoutis.  It does not take much to show the savagery, frustrated desires and prejudices underneath in all of us.  We know people like this or maybe we are seeing ourselves in a mirror?  It’s very funny to watch these people but it’s also an unsettling experience.  The writer, Yasmina Reza, has captured a truth about humanity that we like to think does not exist.

The four cast members give excellent performances.  Jim Adamik is repellently wonderful as a businessman who is only at this meeting to please his wife.  Self-centred, aggressive and always on his mobile phone, he delights in baiting the others and sitting back to sadistically enjoy the results.

Lainie Hart gives great depth to the character of a wife and mother who is unhappy in her marriage and struggling to contain the frustrations building up inside her.  Carolyn Eccles quickly shows in a sharp and physical performance that she is not as reasonable as she first seems.  Josh Wiseman deftly captures a smugness and passive resistance that infuriates the others.

The actors’ sense of timing in this fast-paced play is superb.  Jordan Best’s assured direction blends breathlessly fast comedy with the sadness underneath.  Yes, we’re laughing, but it hurts.