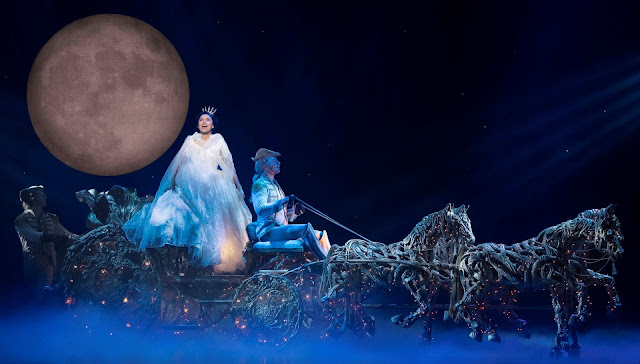 Charles Perrault’s story of Cinderella has inspired operas, ballets, pantomimes, musicals films and television productions almost from the time it was first published in 1697. It attracted the attention of Rodgers and Hammerstein in 1957 when they were asked to write the songs for a one-off television special starring Julie Andrews. Oscar Hammerstein 11 wrote the book for that version.

When the idea was mooted in 2013 of a new Broadway production utilising the Rogers and Hammerstein score, Douglas Carter Beane was tasked with writing a new book, and it is that version that anchors this delightful production.

Beane has managed to bring the story up to date with some wry and witty dialogue, while preserving the essential old-fashioned story-book quality which makes it so appealing to young and old alike.

In this lavish production, the Prince, now called Topher, is more than a cardboard character. Rather a young ruler seeking to better the lives of his subjects. No longer is Cinderella a winsome creature whose only qualifications for promotion to royalty are that her foot fits that glass slipper.

In Beane’s version, Cinderella, now named Ella, is much feistier, and yes, her foot still has to fit the slipper, but she now has a social conscience and wants to work beside her prince to help him bring that change about. It’s all glitter-coated of course but how irresistible is that?

There’s also a revised storyline for the Stepmother and her daughter, but you’ll need to find that out for yourself.

Anna Louizos’ settings are just as  storybook beautiful as you want them to be, as are the lavish costumes by William Ivey Long, who throws in some magical costume transformations to up the wow factor.

Reteaming Shubshri Kandiah and Ainsley Melham as Ella and Topher was a shrewd move as the chemistry they shared in “Aladdin” is repeated here, and given more opportunity to flower. Kandiah is incandescent as Ella, while Melham looks every bit the handsome prince, only funnier with his flair for tongue-in-cheek comedy.

Tina Bursill as Madame, has the best costumes, looks magnificent and commands the stage in every scene she’s in. As her daughters, Gabrielle and Charlotte, Matilda Moran and Bianca Bruce make the most of every opportunity they’re given.  Charlotte (Bianca Bruce) gets the best song, “Stepsister’s Lament” in the second act, while Gabrielle (Matilda Moran) gets her man.

Nicholas Hammond makes a strong impression as the shifty, Sebastian, bringing a welcome gravitas to the role. Josh Gardner charms as the well-meaning Jean-Michel, and while she almost seems wasted as the mysterious Marie, Silvie Paladino shares the magic moment with Ella, then thrills later in the show with the big ballad “There’s Music in You”.

Among the hardworking ensemble that play Knights, Townspeople, Lords and Ladies of the Court as well as Peasants, all with equal aplomb while enthusiastically executing Josh Rhodes’ athletic choreography, William Brougham (Fox) and Lewis Shilvock (Racoon) stand out by virtue of their impressive acrobatics.

Then of course there’s the Rogers and Hammerstein songs which propel the show, gorgeously arranged and sung to the lush accompaniment of Simon Holt’s excellent band.

You’ve probably gathered by now that this is one of those shows that defy sensible critical assessment. It’s just so damn enjoyable.