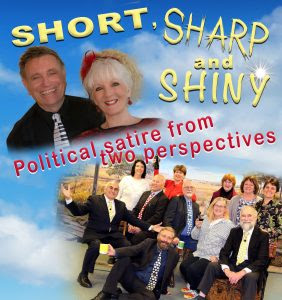 Shortis & Simpson: the well-known John Shortis and Moya Simpson, first performing as the Short and Curlies at the Queanbeyan School of Arts Café, with Andrew Bissett, in 1996.

The Shiny Bum Singers:
A secret selection, maintaining the Privacy Act, of Public Servant members of this choir, now an institution, formed when “Chris Clarke, Pat Ryan, Julie Barnes and Peter Munday put a joke application to the 1999 National Folk Festival organising committee for ‘The Shiny Bum Singers’ who did not exist, performing ‘the work songs of the Public Service’, ditto.”

Margaret Hadfield’s The Artists Shed has a long history in Queanbeyan, moving into Fyshwick in 2019.  As a performance venue, thoroughly imbued with such colourful surrounding artwork-in-progress, there is a welcoming, social-gathering atmosphere very much in tune with having fun with politics, the focus of existence in Canberra, the Nation’s Capital.  There are still car numberplates extant, from the days of Australian Capital Territory Chief Minister, Kate Carnell, embarrassingly reading “Canberra – Feel the Power”.

There was plenty of power in today’s singing, including from members of the audience when slides showed the words of Shiny Bum choruses.  A special note was Moya Simpson’s lower register, with an extra special accent in the song Funiculi Albanese.

It was this song which made me appreciate living in our kind of democracy.  The question is how should we pronounce the Prime Minister’s name?  Albaneezy or Albaneez or Albanèse or even Albanaisie?  All with a gruesome Italianate flavour, of course.  It made me see Shortis & Simpson as a parallel to another Canberran award-winning satirical artist, the cartoonist David Pope.  Was this song racist?  Was the song which included how our politics is now Scott-free insulting to the previous Prime Minister?

Would all these amusingly critical singers be jailed in Russia, Iran, Myanmar or even Thailand?  Here? Of course not.  Perhaps I might be: for discrimination, because I imagined the pronunciation of  Anthony’s name could have been ‘not Albaknees’ in contrast to ‘Scott-More-on-his-knees’ when the influence of Pentacostal religious adherents in recent politics here and overseas was noted.

The point is Short Sharp and Shiny is a very funny show.  Though Moya claimed that the political knives were sharp and shiny, it is the shine in the humour which keeps the satire from being merely nasty.

It has to be said, though, that this audience – mostly of my generation – enjoyed the 50th Year celebration of the It’s Time song of the 1972 Labor campaign which won government for Gough Whitlam, and hoped ‘Now we are Scott-free’ that things are going to be better as they sang ‘Advance Australia Where?’  There was just a degree of pressure as Treasurer Chalmers in Pyjamas in concert with the PM hung the Christmas stockings on the Speaker’s Chair, now that the other Speaker is no longer there.

The Public Servants backed the thought up with There’s a Hole in Your Budget – how are you going to fix it?  With taxes on the wealthy, but business won’t like it.  With squeezing the poor, but that’s not morally right.  As in the old song, the hole remains in the budget with no clear way it will be fixed.

There’s a song about potholes, of course; and S&S’s signature ‘Learless Feeders’, among whom is the Leans Greeder, Badam Ant; and a stack of others, with one on a genuinely serious note, Honeybee Blues.  The varroa might (mite) mean we have no honey, no veges, no fruit if we can’t control it now it’s arrived in Australia.

But in the end it was singing of Time for Freedom, for Old Folks, for Children, for Loving, for Caring; Time we Moved; Yes it’s Time – time for the new Labor government to move with the times after these 50 years – that ended the show on a high note.