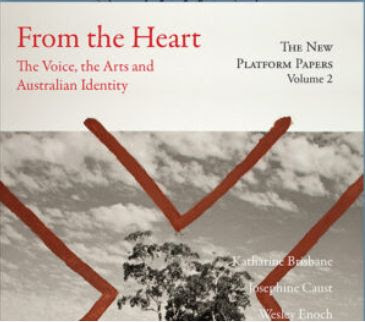 From the Heart - The Voice, the Arts and Australian Identity

Currency House, Sydney, in association with Griffith University, Queensland.
This volume has been published with the generous support of the University of Sydney, School of Art, Communication and English.

From the Heart: the imperative for the arts ~ the sector responds
Eddie Synot:  ‘The Meaningful Expression of Indigenous Sovereignty through the Uluru Statement from the Heart’
Sally Scales:  ‘Art, Culture and the Voice’
Rachael Maza:  ‘Re-RIGHT-ing the Narrative’
Liza-Mare Syron and Harriet Parsons:  ‘Power, Culture and the Search for Legitimacy’

Wesley Enoch:  Take Me to Your Leader: the dilemma of cultural leadership (reprinted)

If you are keen to know the state of the live on-stage play and all those attached to it, and perhaps of our political future, you might like to begin with this quote from Josephine Caust:

A report by Bill Browne, published by the Australia Institute
in May 2021, calculates that if the Federal Government had
invested $2 billion in the arts and entertainment sector instead
of the construction industry in 2020–21, it would have created
8,593 jobs: twice as many jobs for men and ten times as many
jobs for women. Women represent only 12% of the workforce in
construction, while in arts and entertainment the gender balance
is 49% men and 51% women.

Julian Meyrick explains:
Welcome to Volume 2 of the New Platform Papers with essays by Josephine Caust, Tyson Yunkaporta and Noel Pearson; the keynote speeches of Eddie Synot, Sally Scales and Rachael Maza from this year’s Authors Convention, From the Heart: the Imperative for the Arts; Wesley Enoch’s landmark essay from 2014 Take Me to Your Leader (reprinted); and the Currency House submission to the federal government on the National Cultural Policy consultation.

He continues:
In the National Cultural Policy consultation, the first goal those making submissions were asked to address was drawn from Creative Australia: to ‘recognise, respect and celebrate the centrality of Aboriginal and Torres Strait Islander cultures to the uniqueness of Australian identity’. It is the view of Currency House that this is not an additional policy goal but rather the gateway through which the vital question of ‘Australianness’ in our arts and culture should be properly understood. In other words, the full and free expression of First Nations culture is a matter that affects us all ….Taken together, [the essays] are a signal indication of the spiritual expansion that is taking place in our ‘national imaginary’ to include and own the real story of this continent, its First Nations and our modern Australian nation.

In early 2020, the ABS revealed that ‘arts and recreation’ had
been the sector hardest hit by the closures in Australia with 94%
affected.  The Grattan Research Institute estimated that up to
26% of Australian workers were likely to lose their jobs due to
lockdowns and restrictions, but in the creative and performing
arts this figure jumped to a whopping 75%.  Yet Coalition politicians
continued to portray the arts as a ‘lifestyle’ choice.

The value of the Currency House Platform Papers, from No 1: ‘Our ABC’: A Dying Culture? in 2004 to this year’s second volume of New Platform Papers, is to be found in the range of issues and experiences that make up that “spiritual expansion” in “our ‘national imaginary’” – and as Caust makes clear – in our concrete reality.

This body of work is all about knowing our past so we may improve our future. Tyson Yunkaporta expands my non-Indigenous understanding of those Australian Bureau of Statistics numbers, when he writes about having trouble with his canoe:

Ours was a give-and-give economy, not give-and-take, as those
who believe in ancient free market instincts of reciprocity like to
tell us. There was no invisible hand entity guiding us, only the
Law of the land. In embassy and trade, we shared this give-and-give
relation across the sea to the north. This relation enriched us,
not with growth, but with increase. Our increase-based economy
measured wealth in the multiplication of connections rather than
the hoarding of resources and credit.

I’m having trouble with this canoe, because it exists now in a
skewed give-and-take economy. It is art now, because there are
layers of abstraction and extraction between the canoe and the
ocean of life it is supposed to travel.

Noel Pearson makes that art as concrete as the destruction of life in:

If leaders are dealers in hope then the unabating problems of
despair in Australia’s remote communities, exemplified by the
recent media concerning Yuendumu [Northern Territory police
officer Zachary Rolfe has appeared for the first time at the
coronial inquest into the death of Kumanjayi Walker
15 November 2022], leaves the nihilists who say
‘fuck hope’ in commanding authority—because the facts on the
ground support them, rather than those erstwhile leaders like me,
who try to deal in hope. Yuendemu is only the latest instalment
in a decades-long story of despair and long tolerance of misery
and destruction of lives.

The Platform Papers are invaluable for me, this invader, however unwitting and naïve at age 14 in 1955 - a £10 Pom.  The expansion of First Nations culture out of their tens of thousands of years of tradition in song, storytelling, dance and visual arts into creative writing and theatre began for me with the National Black Theatre, established in Sydney’s Redfern in 1972, and in a significant way by Sam Watson, a Wangerriburra and Birri Gubba man, who had blood ties to the Jagara, Kalkadoon and Noonuccal peoples, who wrote the novel The Kadaitcha in 1990.

The family names Maza (Rachael) and Syron (Liza-Mare) link the From the Heart section of this Platform Paper immediately to the National Black Theatre and its development through connections with ABC TV and Nimrod Theatre, the precursor of today’s Belvoir, which through the Balnaves Foundation has put the spotlight on First Nations theatre for many years now.

Wesley Enoch (whose professional development workshop for teachers I attended, probably in the 1980s) has become a legend in himself, not only for the unforgettable The 7 Stages of Grieving (written and performed with Deborah Mailman), but as director of the Sydney Festival 2017 – 2021.

In other words, this volume of essays and speeches is, in bureaucratic speech, a change agent – about the changes in the Australian ‘national imaginary’ that have been and will continue to be under way.  Just so long as, at the political level, the put-downs and mistreatment of the arts as mere ‘life-style’ develop, as I hope they will with this year’s new government, into the cultural necessity which the arts are, for all Australians. 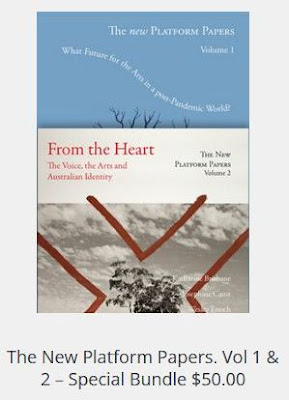