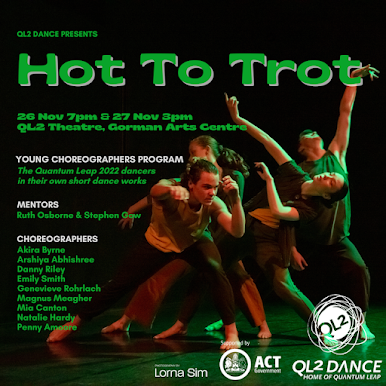 The annual “Hot To Trot” performance gives QL2 dancers the opportunity to step into the role of choreographer, mentored by staff and supported by the dancers as collaborators and performers.This year eight dances and one dance film were presented by choreographers aged 15 to 19.  All were of a consistently high standard, imaginative and danced very well by the enthusiastic performers.

The standout dance was “F.A.S.T.” by Akira Byrne.  This piece explored the warning signs and progression of stroke.  Taken from the experience of a family member who suffered a stroke, Akira Byrne produced a work of searing quality.  Its intention was clear throughout, the angular and fluid movements were executed very well by the dancers and the music, “Tree’s Sacrifice”, by Ezio Bosso was a good choice.  Lighting was cleverly used to enhance the atmosphere.

There was fine use of lighting in the finale, particularly, in Emily Smith’s “Cover It Up”, a work finding compromise amidst conflicting perspectives.  It was dramatic and danced with assurance throughout.

The use of masks in “Vulnerability Of The Individual” by Natalie Hardy was especially effective in conveying the message that humans do not need to conform to society’s beliefs and stereotypes to reach their full potential.  The dancers displayed very effective body control in this appealing work.

In “Simplistic Pleasures” by Arshiya Abhisree, about breaking free from routine and allowing yourself to embody a sense of pleasure and happiness, there was a particularly effective use of light with the fine dancing.  The facial expressions of the dancers and the movement conveyed the intention of the dance very well. 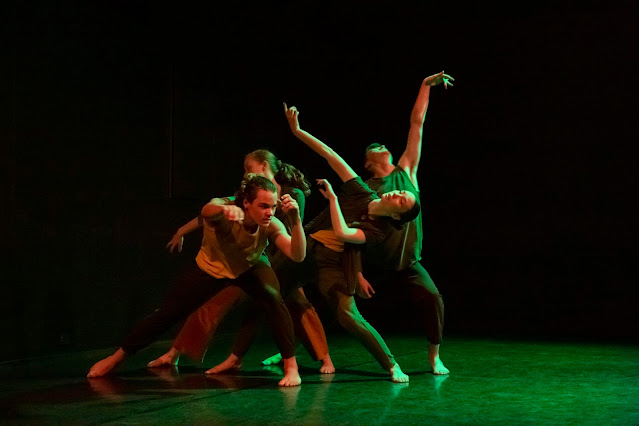 “Not Goodbye” by Mia Canton was a personal work symbolising the connection between her and her twin sister.  The music, from the film “Driving Miss Daisy” by Hans Zimmer, produced a feeling of nostalgia that was matched by the sensitive dancing of two young performers.  There was also a good use of light and the energetic, unison dancing of the older performers was also well done.

The dance film “Waiting” by Magnus Meagher was heavily influenced by the surreal, geometric urban paintings of Jeffrey Smart.  Using his dancers in the suburban landscape in and around one of Canberra’s iconic bus shelters, filmmaker and choreographer, Meagher, produced a highly effective film, blending reality, daydreams and imagination.

The remaining works were no less effective, achieving their goals with intentions very clear, good use of light and dancers well able to support and enhance their visions.

This review was first published by Canberra CityNews digital edition on 27 November.