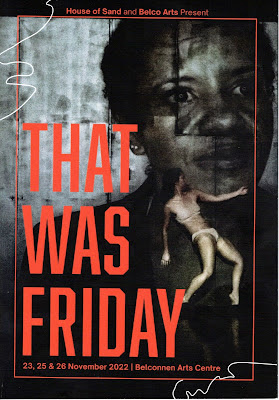 That was Friday. A House of Sand and Belco Arts Co-production. 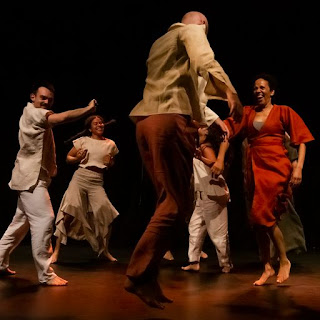 House of Sand brings their latest foray into multi disciplinary performance to Belconnen Theatre for a regrettably short season. In keeping with Belco Arts’ philosophy to programme new and innovative works, House of Sand’s That Was Friday is highly visceral, thoroughly engaging and deeply personal. “That Was Friday is about identity and belonging” actor Sara Zwangobani tells the audience at the commencement of Part 3 Beginnings. Interestingly, the final part of the four part experience, preceded by Prologue, Family and Society is a time of deep reflection, casting our minds back to the separation of family members that compelled us to resort to Zoom during the Pandemic and the longing for personal contact by a Mother (Sara Zwangobani), her daughter Eliza (Enya Daly) and her son Jack (Lachlan Martin)

It would be simple to say that this is an ordinary tale about a mother who dies , leaving a son and daughter  to grapple with the notion of who they are without the mother who brought them into the world. It is the universal quest for certainty, for identity. In Part 2 the audience is regaled with a Pauline Hanson style diatribe, longing for the homogeneous society devoid of those who don’t belong, are different and don’t fit the norm. It is a theme that runs through the production, probing the autobiographical account of gender reassignment  and the fictional experiences of quire Jack in Berlin.. In a moving scene, Eliza and Jack sit together seeking the comfort that strikes at the heart of the loss of their mother and their desperate need to belong.

But it is Turkish Armenian Amrit Tohari Agamemnoian’s  videoed telling of his family’s struggles that sheds a powerful awareness of a searing global pain. Genocide has murdered millions of his people, destroying that vital connection of belonging and driving them away from family, society, culture and identity. It is the cruel consequence of displacement, made even more terrifying for a trans person whose very identity could result in a society’s sentence of death.

That Was Friday, inspired by a poem by Ruby Dixon is elusive on first reading and I search for context, for affirmation, for the clues revealed in choreographer Eliza Sanders’ programme notes and writer Jack Sullivan’s jottings. These are clearer, and yet House of Sand’s intriguing commentary on the human condition, revealed in evocative sensual dance, illuminating videography and authentic acting demands engagement, reflection, identification and personal, emotional and physical response. Heart and mind coalesce in a fusion of dance, performance and videography and That Was Friday inspires an audience to privately ask, “Do I know who I am?” Polonius’s advice to his son Laertes- To thine own self be true- echo in my mind as I watch the dancers glide, slide in isolation or embrace  in loving need or thrust themselves through the air in Dionysian frenzy, releasing the shackles of conformity and convention,

That Was Friday is collaborative theatre at its most honest, most revealing and beautifully performed by a professional company that share a common bond, the need to be true to themselves, to understand the role of family, the need to fly, the desire to return and sometimes the struggle to survive in a society that does not understand.

That is one reviewer’s view. That Was Friday demands commitment by an audience, not only to share in a unique theatrical event, but to question and to learn. That is House of Sand and Belco Arts’ gift to their audience.   It is a challenge worth embracing.

That was Friday runs for about two and a half hours with a short break and a fifteen minute interval. In time it may be tightened and the dance sequences  made less repetitive . Although I may have preferred the evening to have been shorter and tighter, I wished the season could have been longer so that more people could experience the extraordinary talents  and  the  unique and absorbing theatrical experiment that I witnessed on a Friday night at the Belconnen Arts Centre. That Was Friday.