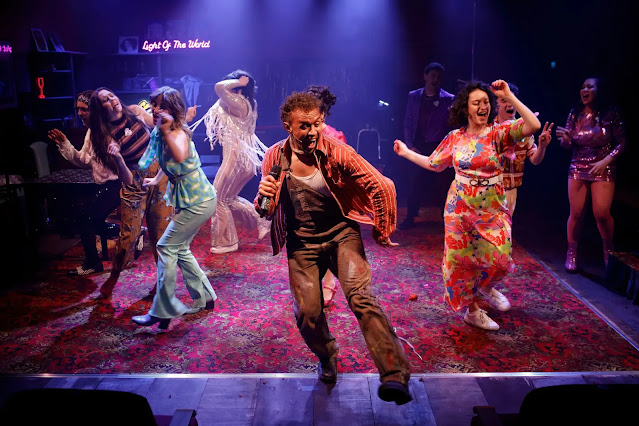 Music and Lyrics by Stephen Schwartz.

Catching some air on the pleasant outdoor balcony of the Hayes Theatre prior to the performance I spoke to the woman standing beside me. “What attracted you to the show?” I enquired. “Oh, I’m the mother of Jesus” she replied. And in answer to my second question, her name wasn’t Mary but Bridget.

Director, Richard Carroll has been carving out quite a name for himself as an innovative director with a talent for re-inventing old musicals for new audiences. The fact that by the time I got to see “Godspell” the season at the Hayes had already been sold out attests to the success of his efforts.

“Godspell” has always been popular in Australia. Indeed the first production in the world after the Off-Broadway opening in 1971 was in Melbourne in the Playbox Theatre where it opened in November 1971 with a cast headed by Christopher Pate, Colleen Hewitt, Colette Mann and George Spartels.

So popular was this production that a second company was formed for Sydney which opened in the Richbrooke Theatre in April 1972 with a cast that included John Waters, Peita Toppano, Mary Rhone, Rod Dunbar and Hilton Bonner. John O’May replaced John Waters when this company toured.  These productions ran from 1971 to 1974 and there have been countless professional and amateur revivals since.

For his production however Carroll has discarded the traditional trappings of hippydom associated with this show, and moved the action into a run-down cabaret room, complete with pole-dancing apparatus. Here a group of lost souls gather in search of some direction for their lives.

Jesus arrives in the form of a charismatic young woman (Billie Palin) dressed in an Elvis Presley jump suit, who proceeds to conduct a series of  workshops based on the biblical parables.

The strength of “Godspell” has always been Stephen Schwartz engaging hit-packed score, and Carroll has cast his production with an outstanding group of multi-talented singer/musicians who between them play no fewer than 40 instruments.

Musical Director, Victoria Falconer, who also performs in the show, draws on these skills to devise some glorious arrangements. Memorable among them was Stephanie Caccamo’s breathtaking “All Good Gifts” initially accompanied hauntingly by Jerimi Campese on single cello.

Almost all appear to play piano at some point, while others accompany with guitar, accordion, keyboards, or whatever appears to be at hand, including a musical saw for “All For the Best”.  The group harmonies throughout are glorious, and all perform Sally Dashwood’s exuberant choreography with enthusiasm.

Some time-wasting audience-participation missed the mark at this performance, and Falconer’s clever keyboard turn, where she has the cast carry the keyboard up and down the Theatre’s stairway while she continues to play and sing, is entertaining, but holds up the show and feels out-of-place.

Overall however, this entertaining and provocative production succeeds in its aim of breathing new life in to a show, very much of its time, but still with something to say. It’s also a splendid showcase for the talents of its multi-talented cast.