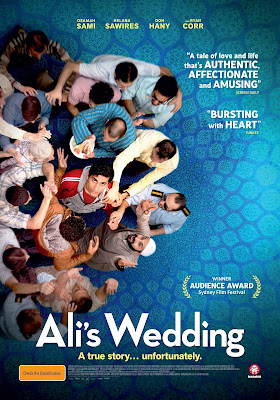 Smitten by a lovely girl at the local mosque and eager to make his father and family proud, a young man tells a lie. It’s such a colossal deception that he couldn’t possibly get away with it, but he’s such a guileless, pure-hearted dreamer that the few people who want to exact shame and punishment for it end up looking like the bad guys.

Romantic love and filial duty are rather old-fashioned virtues for propping up 21st century romantic comedy, yet the conflict between them may be back with boy meets girl from a different cultural background. Like the popular American rom-com The Big Sick, this terrific film co-written by actor and stand-up comic Sami and award-winning screenwriter Andrew Knight, and directed by Jeffrey Walker, makes them front and centre here.

Set in the Muslim community of north Melbourne, Ali’s Wedding is based on Sami’s own life, ‘unfortunately’.

What a story it is. To begin with, Ali is born the son of a Muslim cleric, an Iraqi, in the Iranian holy city of Qom where he spends his early life. When he is 12, the family emigrates to Australia.

The humour of Ali’s subsequent life adventures derives less from the fish-out-of-water possibilities of living in a different culture than from anomalies within the expat Muslim community itself.

For the amusement and instruction of his congregation, Ali’s father (played by Don Hany), wrote a musical comedy called Saddam: the Musical, with him in the title role. Really. It went down well and the production travelled to the United States. Well almost. Ali’s encounter with Homeland Security makes for some classic humour of miscommunication. Proving the adage that there are times when you gotta laugh, or you cry.

Bolstered by impulse rather than design, Ali gets into a pickle when he lies about his score at the university entrance exam for medicine. With the crowd assembled for prayers at the mosque, women to one side and men to another, Ali steps up to the challenge to his family honour thrown down by the rival cleric and his high-achieving son, declaring he achieved the highest score.

What’s touching is it seems what he really wants is for everyone to acknowledge that the stunning score Dianne (Helana Sawires) achieved in the same exam has actually tops them all.

It’s Dianne who Ali really fancies, even though the girl his family intends him to marry is really sweet. Dianne is Australian-born, and you know what that means, even if Ali’s younger sister is too! Life for Ali has become beyond complicated.

Yet neither Ali nor his cheerfully Aussie mechanic brother Mohsen (Robert Rabiah)—one of many delightfully overdrawn characters—look like they would sink into deep depression if they fell short of family expectation. Laid back, you would say. Their baby sister looks all set to make up for any family shortfalls anyway.

Ali’s Wedding caught me unawares. Expecting another dull exercise pushing the right buttons rather than making me laugh, I found instead a genuinely engaging heart-felt comedy showing how people and families can be just the same everywhere.

The characters live, the feeling is generous and humanistic, and I’m glad to say that unlike some of the movies that pass for comedy these days—Girl’s Trip anyone?—it’s funny.