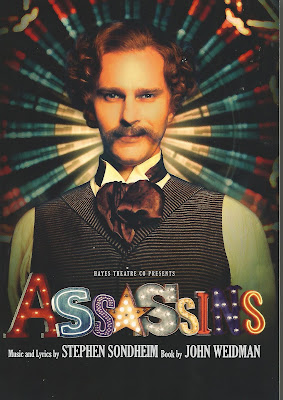 Stephen Sondheim always expected that the content of this dark musical would disturb people. He intended that it should. He could not have predicted however, that, nearly 30 years later, at a time when two world leaders compete to convince us that the only way to solve their disagreement is nuclear war, the content of his musical would resonate even more powerfully.

His characters are a group of historical misfits, all with the same idea, that the only way to solve their problems is to kill a president. Some were successful, other’s not so. But the real shock of this show is the guilty pleasure derived from the entertaining way the dilemma of each of these unfortunates is depicted.

Dean Bryant’s brilliant production has the action taking place among the detritus of a decaying amusement park, complete with carnival lights, a rusting dodgem car and discarded merry-go-round horse. The audience enters the theatre to discover a sleeping figure. On his lap is a book, with the word ‘Trump’ prominently displayed on the cover, and a haranguing political speech emanating from the radio by his side.

As the various characters are introduced by the balladeer (Maxwell Simon, who later doubles, rivetingly, as Lee Harvey Oswald), to the upbeat “Everybody’s Got the Right”, each is handed a gun, with the promise that it will solve their problems.

The mood changes with the entrance of David Campbell as John Wilkes Booth, the actor who shot Abraham Lincoln during a theatre performance. Campbell, charismatic and almost unrecognisable in wig and facial hair, dominates the stage in all his scenes, particularly during “The Ballad of John Wilkes Booth”, and later in a chilling scene in which he manipulates and coerces the hesitant Lee Harvey Oswald into killing John F. Kennedy.
Campbell is surrounded by an outstanding ensemble which includes Bobby Fox, compelling as the wild-eyed Charles Guiteau, whose failed attempt to assassinate President Garfield, led to his execution at the gallows.  Martin Crewes is an intense Giuseppe Zangara, driven to desperation by stomach pains.

Hannah Fredericksen captures the spaced out fragility of Charles Manson devotee, ‘Squeaky” Fromme) whose failed attempt to kill President Ford, brought her in to contact with the similarly incompetent Sara Jane Moore (portrayed by Kate Cole with delicious comic malevolence), who had the same target in her sights but only managed to kill her dog.

Dressed in a tacky red Santa Clause costume, Justin Smith is unsettling as Samuel Byck who spends his time writing critiques to Leonard Bernstein, while Laura Bunting (Emma Goldman), Connor Crawford (John Hinkley Jnr.), Jason Kos (Leon Czolgosz), and  Rob McDougall (The Proprietor) all provide memorable performances in a cast in which there are no weak links.

Superb singing, together with excellent diction and admirable sound design, allows Andrew Worboy’s gutsy band to do full justice to Sondheim’s surprisingly accessible score without compromising his brilliant lyrics. Outstanding lighting design, coupled with the shiny stage surface and Andrew Hallsworth’s inventive choreography fascinates the eye into believing that everything is taking place in a much larger space than the tiny Hayes Theatre.

“Assassins” is certainly not your usual musical romp. This superbly staged realisation of one of Stephen Sondheim’s most disturbing musicals challenges and entertains in equal measure, making it a brilliant addition to the list of outstanding productions by the Hayes Theatre Company. It should not be missed by anyone seeking an exceptional music theatre experience.