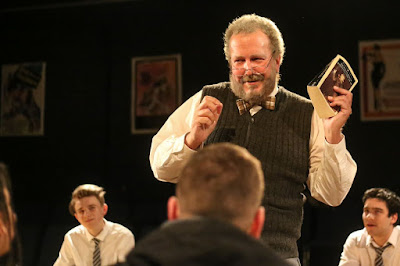 In Alan Bennett's brilliant play "The History Boys" joint directors Jarrad West and Christopher Zuber find the foxhole camaraderie of a talented group of boys squaring up for the challenge that will make men of them.

Cutler's Grammar School in the North of England has an unusually talented class of history students, and the headmaster (Geoffrey Borny) is starting to entertain an itchy hope that this promising crop may yield Oxford or Cambridge scholars.  He brings in a killer to make them exam ready, the serious and reserved Oxford alumni Irwin (Hayden Splitt).

The class is devoted to their charismatic and loving teacher Hector (Chris Baldock), who delivers free-form, flamboyant lessons, protected from any hint of a curriculum or accountability by a strategically locked door.  He has taught his charges to love literature and recite impressive chunks from memory, but believes that these treasures should not be squandered on minutiae such as exams.

We are set up to love Hector - he bursts onto the stage still holding his motorcycle helmet, and his class has a carnival atmosphere.  Irwin by contrast is aloof and demanding, and like a snake in Eden soon has his students questioning whether the Holocaust was really that significant.  But Irwin has a point: Hector essentially teaches his students to parrot the things he loves - even if they parrot with gusto and panache.  Irwin is the only person coaxing the students to think in new ways, and if they become cynical about history and truth, at least they are thinking and forming their own conclusions.

Complicating this clash of teaching styles, Hector also molests his students - and with such regularity that the students regard having their balls fondled as a weary duty they endure for their favourite teacher.  When Hector's behaviour is outed, he waxes poetic on his own weakness, and is justly slammed by fellow teacher Dorothy (Alice Ferguson). But Baldock's charisma and the energy of the classroom scenes define this production, and at the end of the play we are expected to reflect on Hector with nostalgia and appreciation - requiem for a kiddie fiddler.  The play is strengthened by its open-mindedness and willingness to suspend judgement, but I found myself wondering what kind of antics Hector got up to before age slowed him down.

The students themselves burst with energy and character, and while the classroom scenes are very active and physical there was no showboating by the young performers, but instead a commitment to telling the story and the power of the overall ensemble.  I was very impressed by the maturity of the performances on display, but the clear stand-out was Henry Strand as Posner - both Jewish and gay, an outsider on both counts.  Posner's anguish and longing as he struggled with his feelings was deeply moving.

Borny gave a fustian performance as the headmaster, making him both unlikeable and risible, but if you pierced the character's presentation as villainous comic relief he did make some excellent points - for example, perhaps there are some good arguments for a curriculum, and maybe teachers shouldn't molest their students.  The always watchable Alice Ferguson was a lot of fun as the mordant but wise teacher Dorothy, the representative of the female experience articulating it to a group largely indifferent to the inner lives of women.

The use of performance in the round was perfect for this production, because it  recreated the school experience of being stuck at a desk looking at the room from only one perspective - whether that perspective is the one of the student, or the one of the teacher.  It was easy to feel like a member of the class, and resonated well with the struggle of the students to break out of their own limited view of the world.

This enthralling and satisfying drama tackles major questions about education, and embeds the big philosophical questions in vivid characters and sparkling dialogue.  The direction adroitly manipulates the way the audience responds to the characters, setting up conflicts and questions that lack easy answers.  Everyman Theatre has always been fascinated by the bonds that tie men together, and by going back to the pressures and struggles of high school has found new terrain to master.