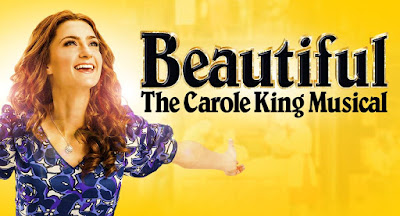 Prolific singer/song-writer, Carole King, continues to enjoy a successful career, and this glitzy, hugely entertaining musicalisation of her story, will do that career no harm at all.

For his witty, perceptive book for the musical, Douglas McGrath has concentrated on perhaps the most fertile period of her life, where she met and married lyricist, Gerry Goffin, and together they earned a living writing hit songs for other artists. He also includes their friendship with rival song-writing team, Barry Mann and Cynthia Weil, together with a liberal selection of the quartet’s best songs, to create a fast-moving montage of their lives as jobbing song-writers in New York.

Along the way the audience is treated to interpretations of their songs from the point of conception, to their ultimate realisation by the artists for whom they were written. The Shirelles, the Drifters, the Righteous Brothers, Little Eva, Neil Sedaka, Janelle Woods and Marilyn Wald all make appearances in snappily choreographed vignettes, until the show reaches its emotional climax at the Carnegie Hall concert celebrating the success of King’s break-through solo album “Tapestry”.

The friendship between the four is charmingly portrayed and you’ll be diving for your handkerchief before “You’ve Got a Friend” is even half-way through. But while the relationship between Mann and Weil appears steady, the bumps in the relationship between King and Goffin, including King’s early pregnancy, their hurried wedding, Goffin’s infidelities, his battle with mental illness, substance abuse and their ultimate divorce, provide the musical with a strong dramatic core.

Esther Hannaford gives a warmly luminous performance as Carole King. Her transition from talented gawky teenager to mature performer is beautifully portrayed in a performance that convincingly captures King’s deportment, singing voice and piano style.  The emotional scene in which she sings “You Make Me Feel Like A Natural Woman”, at first reluctantly, then triumphantly, in a hushed recording studio, is one of many memorable highlights in Hannaford’s immersive portrayal which lifts this show above others of the genre.

Josh Piterman also impresses as Gerry Goffin, bringing an admirable depth to his portrayal, and providing their scenes together with an intriguing undercurrent of suppressed frustration.  Amy Lehpamer and Mat Verevis as Cynthia Weil and Barry Mann, add the spice, with Lehpamer almost stealing the show with many of the best lines and the most stylish costumes. There are also fine performances from Mike McLeish as music publisher, Don Kirshner, and Anne Wood as King’s supportive mother, Genie Klein.

Marc Bruni’s slick direction brings real Broadway gloss to this impressive production with its lightning- fast costume changes, revolving pianos and funky choreography.  Spot-on musical direction by Canberra’s own Daniel Edmonds insures that precisely the correct mood is established for each of the songs which provide the memorable soundtrack for a feel-good musical which certainly lives up to its title.