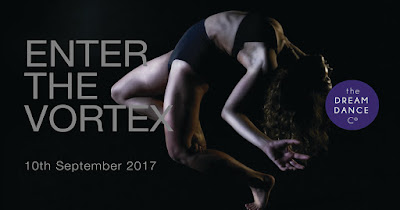 Although The Dream Dance Company was created by Marko Panzic in 2015, this performance of their 2017 production, “Enter the Vortex” performed in the Canberra Playhouse as part of a national tour was the first opportunity for Canberra audiences to experience this exciting young company.  Panzic is well-known to Canberra audiences through his work with QL2, as dance captain for the national tour of the musical, “Fame”, and especially for his work on the television series “So You Think You Can Dance”. So it was no surprise the “Enter the Vortex” drew a large audience of excited young dancers to this single performance. They certainly got their money’s worth.

The program consisted of twelve high energy dance works, all choreographed by Sarah Boulter, and performed impeccably, without interval, by an ensemble of sixteen ridiculously talented young dancers. The pace was set with Ben Zammit’s superbly controlled solo, “The Calm”. The whole company was introduced in a frenetic ensemble piece, “Chaos”, which segued into a testosterone-filled number for the men entitled, “The Fight Within”. Eight girls in soft grey shifts performed a lyrical piece, “The Voice Within” to the sounds of Loren Hunter singing Roy Orbison’s “Crying”.

The production values throughout were impressive, especially the intense, stabbing lighting design and the dramatic, sometimes deafening, soundtrack.

Boulter’s choreography was demanding, imaginative and spectacular. A passionate apache-style duet, danced by Cat Santos and Dayton Tavares, featured a floating table. Another piece featured dancers attached to each other by harnesses. Dayton Tavares and Callum Mooney were combative in “Battle”, as were Bianca Rezo and Lauren Seymour in “Give Me a Reason”.

Frequent bursts of spontaneous applause rewarded the meticulously drilled dancers, as they tossed off spectacular moves with seemingly effortless audacity, passion and attitude, in a non-stop show which thrilled, inspired and entertained, and certainly whetted the appetite for future performances from The Dream Dance Company.