BERNADETTE ROBINSON - THE SHOW GOES ON 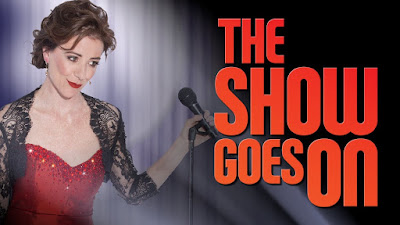 Bernadette Robinson is best known for her remarkable talent for capturing other people’s voices. However, what sets her apart from other vocal impressionists is her extraordinary ability to also capture the vulnerability of each of each of the singers she impersonates. For, in addition to her vocal abilities, Robinson is a formidable actress.

Her new show, “The Show Goes On”, currently having its world premiere season in the Sydney Opera House Playhouse, provides a superb showcase for both these talents.

A microphone, lit by a spotlight stabbing through the darkness as the audience enters, sets the mood for the show. Gradually a small lounge chair, together with a tiny table supporting a glass of water, becomes visible. Three musicians sitting at their instruments in the darkness at the back of the stage can just be made out.

Showtime, the spotlight over the microphone fades, a voice-over excerpt from the title song begins, and then a tiny figure in an elegant, short black velvet cocktail frock enters. It’s Judy Garland singing “The Trolley Song”. Robinson, her hair fashioned in a style favoured by Garland, imitates her vocal mannerisms perfectly. However it’s when she stops singing and begins to talk as Garland that the magic really begins. Sitting in the chair, nervously fidgeting with her dress, Garland addresses the audience directly. She confides her insecurities to them, sings more songs, then introduces Barbra Streisand. In a famous excerpt from Garland’s television show, they sing a duet, “Get Happy”/“Happy Days are Here Again” with Robinson singing both parts. It’s an astonishing tour de force.

Patsy Cline, Shirley Bassey, Edith Piaf, Julie Andrews and Maria Callas all make appearances, each singing their signature songs, and each sharing their performance philosophies. While each occupies the stage, so powerful is their presence that the audience is oblivious of the others.

Judy Garland interrupts from time to time, and after Callas has delivered her thrilling “Vissi D’Arte”, closes the show with “Over the Rainbow”.

Richard Carroll’s direction is impeccable, focussing the audience's full attention on Robinsons remarkable ability to capture the very soul of each performer without the aid of gimmicks or props. The script is intelligent, the lighting and sound both superb, and the musical arrangements as performed by Martine Wengrow, Ron Lemke and Bill Risby, are sublime. The only miss-step on opening night was the reprise of the title song, which felt unnecessary and didn’t really sum up what had gone before it.

Bernadette Robinson is a unique talent, and her brilliance is perfectly displayed in this superbly executed showcase. Don’t miss it.