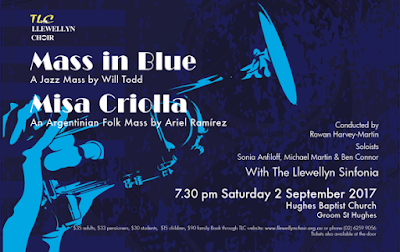 It was an inspired choice by the Llewellyn Choir to pair two Masses, ‘Misa Criolla’ and ‘Mass In Blue’, in a concert.  Using the same text, they could not be more different, musically, and both are very enjoyable works to listen to.

‘Misa Criolla’ by Argentinian, Ariel Ramirez, was written in 1964.  Based on folk material, particularly dance music, it’s a very easy piece to connect with.  From a brooding, atmospheric opening, through driving Latin rhythms to its inspirational finish, it’s colourful and dramatic.  The Llewellyn Choir, under the baton of Rowan Harvey-Martin, sang it very well with the addition of fine singing from soloists Michael Martin and Ben Connor.  The Llewellyn Sinfonia gave the music a strong Latin flavour.

As an added treat, five songs from Manuel de Falla’s ‘Suite Populaire Espagnole for Violin and Guitar’ were played by Rowan Harvey-Martin on violin and Mark Norton on guitar.  These Spanish folk songs are hauntingly beautiful and they were superbly played by both musicians.

‘Mass in Blue’ by Will Todd is a 2003 work set in a jazz idiom.  It’s a challenging work for singers but a delight for audiences to listen to.  The combination of choral music and driving jazz and blues rhythms created an extraordinary atmosphere.  Sonia Anfiloff’s beautifully clear and strong soprano voice soared above the choir, adding another dimension to this fascinating and enjoyable work.

The score makes huge demands on the accompanying pianist and Hugh Barrett played brilliantly.  John Mackey’s solo on the alto saxophone was hauntingly beautiful and there was also fine playing by James Luke on bass and Derrick Brassington on drums.

This review was first published in the Canberra City News digital edition of 3 September.

Len Power’s reviews are also broadcast on Artsound FM 92.7’s new ‘On Stage’ program on Mondays from 3.30pm and on ‘Artcetera’ from 9.00am on Saturdays.