PUTTIN ON THE RITZ - Rob Mills 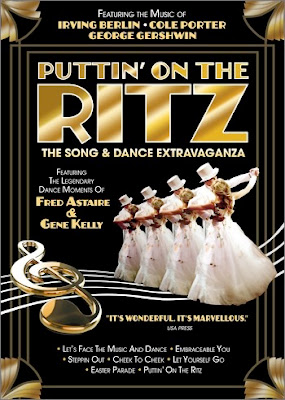 Whether it was the charisma of special guest, Rob Mills, or the promise of some spectacular song and dance, “Puttin on the Ritz” drew a capacity audience to the Canberra Theatre for its one-night-only performance as part of a whirlwind tour of Australia. This spectacular, high energy song and dance show really lives up to its pre-publicity, and then some. The show’s cast of six multi-talented singers and ten energetic dancers, all of whom boast West End experience, together with our own Rob Mills, as a special guest, perform a non-stop succession of favourite songs which hark back to the glory days of Hollywood.

The setting is simple and elegant, just a draped red velvet curtains, a sparkling star-cloth background and judiciously present mirror ball. The staging is slick. The choreography is imaginative and impeccably performed.  Dozens of lavish, feather and sequin trimmed costumes provided a cavalcade of glamorous Holly-wood style spectacle.


The women are beautiful, the men handsome, all are impeccably groomed and each, singers and dancers, capable of performing the various commercial dance styles, ballroom, Broadway, tap and modern, with style, precision and panache.

Singing live to an excellent  pre-recorded sound track, the show opened brightly with Irving Berlin’s  “No Business Like Show Business” before seguing into a Fred and Ginger sequence featuring “I Won’t Dance”, “Dancin in the Dark”, “The Continental” and of course, “Puttin on the Ritz”. Judy Garland was remembered with “The Trolley Song”, “Over the Rainbow”, “Swanee” and a delightful re-creation of the “Couple of Swells” routine she performed with Fred Astaire.

There’s a lovely sequence of songs by the Gershwins, including “S’Wonderful”, “Embraceable You”, “But Not For Me” and “Someone To Watch Over Me”, and another featuring the songs of Fats Waller.

A cleverly staged Las Vegas sequence, performed in a cabaret setting, featured songs associated with the Rat Pack, among them, “Luck Be a Lady”, “Hole in the Head”, “Mack the Knife” and “That’s Life”. A trio recreated the “Good Morning” routine from “Singing in the Rain”, the whole ensemble lit up the stage with a sensational tap routine to “It Don’t Mean a Thing”, and delighted the audience further when they sat on the front of the stage to perform an intricate novelty slap dance, rewarding each round of applause with an even faster version.

Special guest, Rob Mills delighted his fans with a smooth version of “Mr Bojangles”, was less successful with “On the Street Where You Live”, but absolutely smashed it with “You Can’t Take That Away From Me” for which he was accompanied by five leggy showgirls.

As is becoming a bit of a worrying habit with touring shows, there were no programs available. So apart from Rob Mills, the audience had no way of knowing who they were watching, or who the creatives were. Visiting the “Puttin on the Ritz” website was only marginally helpful, but I can tell you that the producer was British entrepreneur, David King, and the six singers were Natalie Spriggs, Monique Young, Emma Kate Nelson, David Wyatt, Simon Schofield, and Australian, Damion Scarcella. No idea who provided the excellent choreography, or the excellent sound and lighting. However, if cleverly staged and impeccably performed Hollywood style song and dance is your thing; watch out for this show when it comes your way.