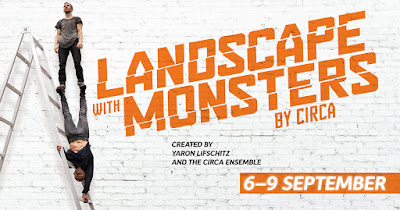 Shows that blur the boundaries between various types of performing arts can provide an experience that feels unique, original and exciting.  Since 2004, Circa has used movement, dance, theatre and circus to create powerful works that leave an indelible impression on an audience.  It’s exciting, funny, beautiful, clever, breath-taking and very entertaining.

Circa’s works have been seen in 39 countries across six continents.  Directed by Yaron Lifschitz, the current company comprises seven performers - five from Australia, including Kathryn O’Keeffe from Canberra, and one from Belgium and one from the United Kingdom.

These performers are extraordinary.  On a bare stage with only some boxes of various sizes and shapes, a ladder and a metal pole to work with, they twist their bodies into some of the most amazing and seemingly impossible positions, creating a world through movement that seems slightly unreal.  This ensemble works brilliantly together and it’s exciting to watch them.  Facial expressions are used sparingly and flashes of humour here and there are unexpected and enjoyable.

The soundtrack of popular song and electronic music that accompanies the movement onstage is very effective and atmospheric.  The lighting design complements the performers and the action very well.

The publicity stated that the show tells the story of post-industrial cities now in decay but any message the show is trying to convey is only very mild.  There are some video projections of industry, the use of wooden boxes and metal objects such as you might find in a factory and the metallic sounds in the soundtrack.  It really doesn’t matter much.  Each section of the show is just enjoyable to experience, regardless of any message.

Circa gives an audience an all-round experience that is exciting, involving and memorable.  You could take anyone to this show and they would enjoy it.

Len Power’s reviews are also broadcast on Artsound FM 92.7’s new ‘On Stage’ program on Mondays from 3.30pm and on ‘Artcetera’ from 9.00am on Saturdays.
Posted by Canberra Critics Circle at 11:54 AM